JOURNEY OF THE GUN 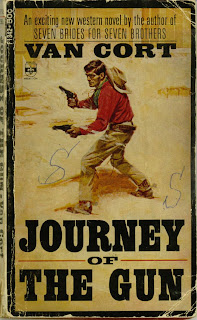 JOURNEY OF THE GUN
By Van Cort
Medallion
158 pages

This book was published in 1966 and sold for all of fifty cents, most likely off some drugstore spin rack. What kind of route did it travel through time and through how many different hands before it reached mine? The answer to the last part is simple enough,
my fellow reviewer, Troy “Doc” Holaday found this somewhere, read it and then sent it along to yours truly. But not before registering it on-line at Bookcrossing.com. More about that after I’ve reviewed this really terrific western drama.

Clay Rand is a young 19 year old out west to seek his fortune. At the offset he gets in with cattle rustlers and the book opens with Clay and his new found friends about to be hanged for this attempted crime. For reasons unknown to him, the foreman of the lynching party spares ’s life and lets him go with a warning. Days later, while traveling alone and still emotionally numb from his brush with death, meets up with a savvy outlaw named Connie Blackwell who imparts a little frontier advice to the boy and gives him one of his extra hand guns. From that point on Clay Rand’s life is buffeted by outside forces and he soon finds himself using that outlaw gun to survive.

Gaining a reputation as a gunslinger, is soon the object of much interest amongst town politicians, ranchers and even the local sheriff. Being handy with a six iron is a marketable talent, he soon discovers. Still, how long before an even faster gun comes along and ends his troubled life? Cort writes an adult story and is very authentic in his portrayal of the burgeoning west with its many complexities, challenges and dangers. In the end, ’s journey is very much of self discovery and he is a better person for it. This is an excellent read and if you can find a dog-eared copy in some used book shop, I recommend it highly.

Bookcrossing is an organization made up of thousands of readers from all over the world who enjoy sharing books back and forth. The process is simple enough. Once you’ve registered at their site (www.bookcrossing.com) you can list a book, give it a specific identification number, which you then paste somewhere on the book, usually the inside front cover. Then merely send it to someone else and allow them to read it and do the same, after logging on and leaving their own comments or reviews. This is referred to as Read & Release. I’ve yet to decide who I’m going to send JOURNEY OF A GUN to, so if you’d like to have some fun with this, by all means drop me a line.