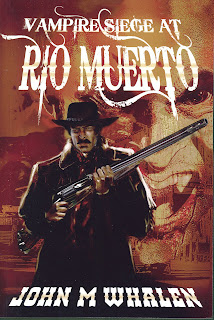 When New Mexican rancher, Don Pedro Sanchez’s only daughter is turned into one of the undead by an outlas vampire named Kord Manion, he’s forced to end her existence by driving stake through her heart. His anger unabetted, he then hires monster hunter Mordecai Slate to find Kord Manion, capture him and bring him back. Don is consumed by a twisted obsession to punish the vampire with his own two hands.

Because of the generous offer of gold, Slate reluctantly takes the job; though he’s never had to bring back one of his prey back alive. It is a cause for concern. Ultimately he finds the outlaw’s hideaway in a small Mexican village. The then manages to kidnap Kord from older brother Dax Manion, who leads a crew of seven vampire riders. Locking Kord half comatose in a chained coffin in the back of his wagon, Slate then starts his long desperate journey back to Don Pedro’s hacienda.

Along the way he crosses paths with a lovely young woman and while helping her escape three Mexican outlaws, is wounded. Half unconscious from the loss of blood, Slate and Marie, the girl, detour to the nearly deserted town of Rio Muerto where they hope to find a doctor and refuge. Slate is all too aware his time is running out. He knows Dax Manion and his posse are hot on his trail.

“Vampire Siege at Rio Muerto” is a fast paced, action packed weird western thriller that never lets up for a second. Whalen is deft at creating iconic western figures as if they had just stepped out of a 1950s black and white movie. By adding the horror element, he weaves a wonderfully original pulp adventure that is a joy from the first page to the last. The result is a truly great read.