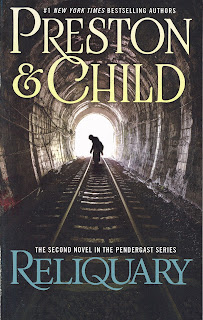 Way back in 2002 a good friend sent us a copy of the book, “The Cabinet of Curiosities” by Douglas Preston and Lincoln Child. In was in this book that we first encountered FBI Special Agent Aloysius Pendergast. What we didn’t know at the time was it was the character’s third appearance in a book by these two writers. Later we would learn he had first appeared in “Relic,” (1995) a horror thriller that was later adapted into a feature film. Now we hadn’t read “Relic” but we had seen and enjoyed the movie. Sadly, in the process of bringing the story to the screen, the screen writers opted to trim the large cast of characters and Pendergast was one of the casualties of those cuts.

Buoyed by the success of that first collaboration, Preston and Child wrote a sequel, “Reliquary” (1997) and once again brought back Pendergast as part of the original cast of characters from the previous thriller. Again, at the time, we were totally oblivious to any of this. Or the fact that Pendergast role slowly growing even though he was still part of an ensemble of players. With the arrival of “The Cabinet of Curiosities” he took center stage and quickly gathered a huge fandom. Soon the series became the Pendergast books and each continued to expand his popularity. It remains our personal favorite such.

Recently we found a new paperback edition of “Reliquary” and immediately picked it up. We were amused at the sub-title indicating it was “The Second Novel in the Pendergast Series.” How things had changed. Being familiar with the movie version of “Relic” we had no trouble digging into this story and realized quickly that it is most assuredly a follow up. In fact one might rightly call it a Part Two of the same tale. In “Relic” a scientist returns from a trip to the Amazon infected by an exotic plant. Upon his return to New York City and the Natural History Musuem, it transforms him physically into a monstrous beast that then terrorizes and murders lots of people before being vanquished.

In “Reliquary” several of his museum colleagues have discovered the truth behind the monster and begin expirementing with what remains of the alien plant. These secret expirement leads to creation of as yet another mental and physical altering drug and they begin testing it on the homeless “moles” that live beneath the streets of the city. Soon these poor souls are turned into horrible creatures and begin killing people at random. When a rich young debutant becomes one of their victims and her headless corpse is discovered in the river, the police begin to investigate and eventually Lt. Vincent D’Agosta and Dr. Nora Kelly, a museum curator, are once again teaming up to solve the grisly murders. It is no surprise when, a quarter into the book, Agent Pendergast appears we readers are once again enjoying another fast paced, fantastic thriller like no other.

Being Pendergast fans, we’re happy to have had this chance to read one of his earliest appearances and as ever cannot wait for his newest book.