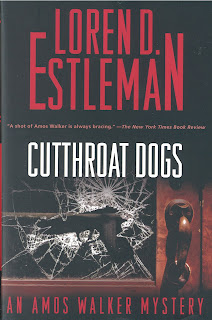 Loren D. Estleman has been writing stories about Detroit P.I. Amos Walker for a while now, as the inside list shows this new offering is nearing thirty published mysteries. Obviously we’re late to the party, but when “Cutthroat Dogs” dropped onto our review stack recently, we knew it was time to meet the guy.

In the grand tradition of classic private eye heroes, Walker is a fast-talking wise guy who knows his city’s streets, the nice and the mean. He’s got a history with the boys in blue as well. A shooting in a local bank gains him a little press coverage which in turns attracts a young lady to seek his help. Her brother, Dan Corbeil, is serving a life sentence in prison for having murdered his college girl-friend, April Goss, twenty years earlier. Walker takes the job only to discover there are some powerful people who do not want the case reopened. First of among these is Ms. Goss’ father, Chester Goss, a TV celebrity who host a reality show entitled “Cutthroat Dogs” that uses the media to pursue lawbreakers.

It becomes obvious to Walker that Goss’s prestige is due to the death of his only child and his public crusade inspired by it. But if Dan Corbeil is really innocent, then the real killer is still at large and despite Goss’s antagonism, Walker is chasing the truth wherever it leads him. All well and good until someone mugs him in his own office.

“Cutthroat Dogs” fires on all cylinders. It’s a fast paced mystery with a likeable, wise-cracking tough guy hero who loves his city. Classic stuff, mystery lovers and a solid read. Thumbs way up.