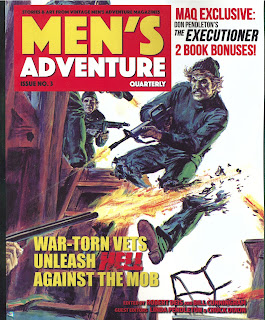 We came home from Vietnam in July of 1968. We were only too happy to return to civilian life and put that last year behind us. By March of 1969 we were working in a shoe factory and attending college at night. Sometime in that month we picked up a paperback novel called “The Executioner – War against The Mafia” by Don Pendleton. It was to be the first in a series from a new publisher named Pinnacle. A few weeks later they released, “The Destroyer” by Richard Sapir and Warren Murphy. After reading both of these initial adventures, we had one thought – the pulps were back! After having been a comic book reader since childhood, we eventually picked up some knowledge of those 30s and 40s yellow paged magazines that had entertained folks during the Great Depression. Reading Mack Bolan and Remo Williams, it was only too evident that they were new, modern “pulp” heroes for a new generation.

Sure enough within months, the drugstore racks were overflowing with new “hero” series ala the Death Merchant by Joseph Rosenberger, Piers Anthony’s Judomaster, Marc Olden’s Black Samurai, Paul Kenyon’s The Baroness. It seemed every possible classic pulp genre was covered to even include the occult ala Frank Lauria’s Doctor Orient books. Oh yeah, for the next decade, we readers would be the benefactors of the newest incarnation of pulps, which had morphed from the classic 40s volumes into the MAMs of the 50s and 60s and now the paperback boom of the 70s. We loved the stuff.

Whereas The Executioner books were by far our favorites and we followed them loyally from Pinnacle to Gold Eagle. Even enjoying the spin-off series as they emerged. At one point we actually corresponded with one of the ghost writers on Able Team. In the end we’d amassed well over two hundred paperbacks with name Pendleton painted across the covers before selling the lot in a yard sale to an employee of the Portsmouth Naval Shipyard in New Hampshire, whose purpose was to divvy them up amongst his co-workers there. So we were delighted they’d found a new and worthy home.

Now Bill Cunningham and Bob Deis have turned their magnificent creative spotlight on The Executioner phenomenon with the third issue of their “Men’s Adventure Quarterly” and it is by far their best issue so far. The volume is jammed packed with not only the history of this amazing ground-breaking series and its creator, but includes several excellent articles and pictorials. The piece on action-adventure writer Chuck Dixon is great and details his own work on such iconic characters and the Punisher and Batman in the comics to his own Levon Cade paperback adventures. There are also several short stories in the same vein such as the over-the-top “The Amputee Vengeance Squad’s Mafia Wipeout” by Jack Tyler. They also feature not one, but two “book bonus” reprints of the first two Executioner novels in their entirety as they appeared in two different MAMs.

As always Cunningham has an artist touch with his beautiful layouts; our favorites being the spread of Gil Cohen cover paintings and further into the issue the reproduction of the first dozen Executioner covers from Pinnacle. Seeing those unleashed a flood of great memories for this reviewer. Linda Pendleton’s memoir of her life with Don relives the early days when Mack Bolan was just an idea that had to be born. Wrap this all up with a little Bettie Page spread and you end up with one of slickest, expertly produced magazine packages ever assembled. Kudos to the Deis – Cunningham team. You boys are 3 for 3 at bat. Now that’s a damn impressive record.