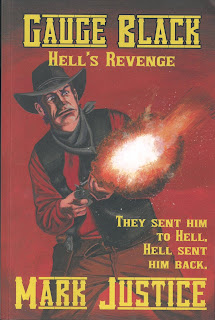 Justice prose is knife sharp and by the time his protagonist has begun his mission of vengeance, the reader soon learns there is not a single ounce of redemption left in this story. In the end, Gauge Black is a heartless monster who lives to destroy his creators.
This is rough stuff, pulp readers. You’ve been warned.
Posted by Ron Fortier at 2:33 PM

Doesn't sound all that different than the Piccadilly Westerns like Edge and Steele.