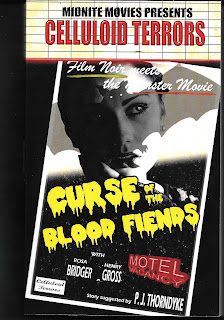 What P.J. Thorndyke has done is given us all the classic Universal Monsters and brought them together albeit in new and original ways culminating in several over-the-top clashes that had this reviewer cheering wildly. Filled with panache, his prose is controlled and creates a steady pace that never once lets up leading the reader to one of the most satisfying climaxes this side of a Saturday Afternoon Monster Matinee.  “Curse of the Blood Fiends” is old-fashion thrills, spills and fun. The kind you thought lost forever. Well, you were wrong. This book has it all. Now go buy a copy!
Posted by Ron Fortier at 2:30 PM