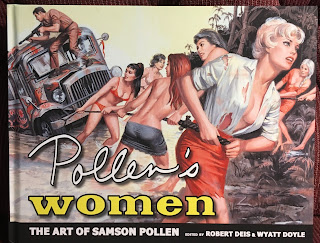 One of the tragedies of the original pulp era was the lack of recognition given to the brilliant artists of that time. Every single week hundreds of pulp titles hit the newsstands, each graced with a gorgeous, colorful cover paintings and filled with dozens of wonderful black and illustrations. Whereas these populace magazines were snobbishly ignored by the purveyors of the uppercrust, academia including and no effort was made to save this amazing art. It has been reported that over 90% of all those great covers and illustrations were destroyed and lost to us forever, save in the fading pages of the actual mags, some eighty years or older today.

After World War Two, pulps evolved into comics for kids and two new adult formats to continue the publication of action adventure stories. One was the small paperback designed to be easily carried in one’s back-pocket and produced on the cheap. The other, and more direct descend of the original pulps, was the men’s adventure magazines, hereto referred to as MAGS. From the 50s to early 70s they proliferated in drugstores racks via dozens of titles all aimed at the World War II veterans looking for stories featuring rugged, individuals not afraid to take on the world. The MAMS catered to tales of war heroes, explorers, tough cops and rebel bikers. It was a cornucopia of he-man virility that oozed off every page.

Accompanying these tales was the macho art; a vital element of the entire package. Like their smaller, golden age predecessors, the MAMS were chock full of amazing illustrations, most done in long double page formats while offering up some of the greatest in-your face all action scenes ever put on a cover. Here were soldiers combating overwhelming odds, or treasure hunters battled savage beasts of every kind imaginable while at the same time protecting some half-clad buxom babe. They were simply men’s fantasies brought to stunning visual reality as created a dozen or so remarkable artists.

One such was Samson Pollen and now editors Robert Deis and Wyatt Doyle have collected dozens of his more spectacular pieces. Each is represented into versions; first showcasing the actual artwork alone and then the same image as surrounded as folded into the magazine’s layout with text and titles etc. It is a truly effective demonstration of the format challenges posed to Pollen and his peers. One of this book’s most intriguing parts is Pollen’s own memoirs which he shared with co-author Doyle. At 86, the veteran illustrator’s tales of his work-for-hire experiences as a professional illustrator are fascinating. Pollen never assumed he was creating anything but commercial art and his job, as he saw it, was to give the editors what they wanted. No matter how silly those requests often times appeared to be. He was told to draw this or that and he did. He was a workman artist.

Today, one gets the sense that he is happily bemused at how valuable his art has become and the status it has achieved in the scheme of things. In this day of digital art, illustrators are a dying breed and one wonders if future generations will ever see their like again. For now we can only tip our pulp fedoras to Mr. Deis & Mr. Doyle for saving work of this true master; Samson Pollen.
Posted by Ron Fortier at 8:12 AM