THE WILL TO KILL 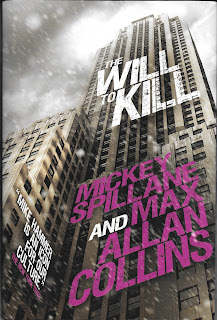 The release of yet another “lost” Mike Hammer novel by Mickey Spillane and Max Allan Collins is always a cause for celebration among mystery lovers. In this case, Hammer discovers the partial remains of a corpse floating on a chunk of ice in the Hudson River. A quick investigation determines the dead man was the butler of a one time cop turned millionaire inventor who also died via mysterious circumstances. Thing is, this retired copper was a friend of Homicide Detective Pat Chambers; Hammer’s good buddy. It is Chambers who sends the tough-guy private eye up into the Catskill to investigate both the butler’s bizarre end while at the same time learning more about the widowed inventor’s death and his four heirs.

Unlike most Hammer tales, where the action unfolds on the streets of the Big Apple, this one has him up in the rarefied air of the well-to-do and their richly landscaped abodes. Once settled into the scene, Hammer gets accounted with the four siblings; two stepsons, both with hidden skeletons in their private closets, a lovely daughter and a challenged younger male with childlike qualities. All of them stand to gain from their late father’s will upon each of them turning forty years old.

Of course, this being a Hammer novel, it comes as no surprise when one of the two stepsons is murdered leaving his share to be divided among the surviving three. And thus we begin to drift into a less traditional Hammer caper and more an Agatha Christie “Ten Little Indians” tableau. This by now means suggest the book isn’t suspenseful and well conceived. Only that it feels out of place in the Hammer canon. Most likely because of the setting itself than any other factor.

Bottom line, any Hammer book by Spillane and Collins is going to be good, but take Hammer out of the City and something gets lost in translation.
Posted by Ron Fortier at 7:34 AM

I may have liked it more than you did. Shows that the Catskills is just as mobbed up as anywhere else, despite the veneer of wealth and nature. I think that's what Spillane was shooting for.