WORLD, CHASE ME DOWN 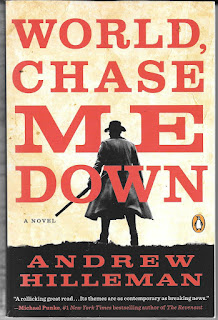 WORLD, CHASE ME DOWN
By Andrew Hilleman
Penguin Books
332 pgs

At the turn of the century, Pat Crowe and an associate kidnapped the teenage son of one of the wealthiest meatpacking tycoons of Ohmaha, Nebraska, Edward Cudahy. The they were paid twenty-five thousands dollars in gold coins as a ransom. They then released the boy unharmed and fled state kicking off one of the most intensive manhunts in U.S. history. Eventually, Crowe, found himself alone and the most wanted man in America. Many considered him the last of the real wild west outlaws.

His flight took him through the southwest, then across the sea to Japan and into Africa in time to participate in the Boer War. Years later, upon his return to America, he gave himself up to the authorities and was brought back to Omaha to stand trial. Then, in the most shocking twist of all, he was exonerated though everyone knew he was guilty. His crime was so blown out of proportion during his years on the run that by the time of the  trial, his character had become the stuff of legend and average American saw him as a cowboy Robin Hood battling the elite rich. He became a hero around which they could somehow rally and strike back at what they perceived to be the injustices of the world.

Now all that is fact.  There was a Pat Crowe, he did kidnap Edward Cudahy Jr., abscond with the gold and ultimately win his court trial. These facts alone make for a fantastic story, but author Hilleman isn’t content to simply give us a dry, fact for fact recitation. Rather, in a truly amazing creative tour de force, he opts to “fictionalize” the story of Pat Crowe and in so doing produces a work so exuberant and outlandish as to clearly classify as a true piece of pulp melodrama

From the onset Crowe, tells us he is no hero and that is the most understated truth in the entire narrative. Crowe is in fact a simple minded, hard working soul who simply cannot accept the injustices the times imposed on the uneducated poor. No matter what financial endeavors he attempted to pursue, the political and economic forces of the time would conspire to assure he was never successful. These was not the days of making dreams come true. Thus, defeated at ever turn, Crowe pragmatically saw his only recourse was to break the law to achieve his goals.

He does so with absolutely no remorse. He is not a cruel man, but then again, has no problem harming, to the point of killing, those lawmen who attempt to apprehend him. The real genius of Hilleman’s tale is that he systematically deconstructs the romanticism of the western.  Regardless of heroic figure the press makes of him, Crowe remains content with his own identity. It is this stoicism that allows him to survive the current of public opinion and in the end see him through these remarkable events as nothing by a solitary survivor; an old man with one hell of a tale to tell. Which is exactly what this book is, one hell of a whopper.  Highest recommendations here.