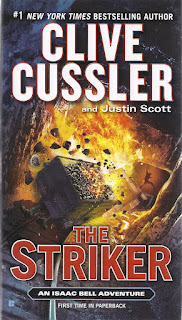 Okay, back-story first for those of you unfamiliar with the Isaac Bell series. He was created by popular new pulp writer Clive Cussler in the first book of the series, “The Chase,” with the assistance of novelist Justin Scott. Since that time, although his name always appears on the book’s covers, it is all too clear that these marvelous tales are penned solely by Mr. Scott. And, we might add, we’ve come to enjoy them just as much as Cussler’s own original Dirk Pitt books.

Isaac Bell is the leading investigator for the New York based Van Horn Detective Agency. The son of a wealthy Boston banker, Bell found the life of a banker much too dull and boring for his taste and discovering the excitement and adventure inherent in his chosen professional, quickly became one of the finest investigators at the Agency. In the previous books, all taking place in the early 1900s, Bell’s saga is set against the amazing birth of the industrial age in America. His cases have dealt with the burgeoning empires of transcontinental railroads and the pioneers of early aviation; whereas in this volume, Scott sends us backward in time to one of Bell’s first assignments.

As the book opens, he is disguised as a coal miner in rural West Virginia attempting to learn more concerning the make up of union organizers determined to gain higher wages and safer working conditions for their members. At the same time he begins to suspect that one of the richest Wall Street tycoons is behind a series of sabotage attacks on the mines that have left dozens injured or dead. Someone has hired a cunning agitator to create turmoil between the owners and the workers but to what end he cannot fathom.

As ever Scott’s historical setting is phenomenal and half the fun of reading these exploits. But with “The Striker” there comes a fresh twist in that this mysterious provocateur Bell is chasing is in many ways as skilled and trained as he is. Could it be possible that the man Bell is hunting is another detective? One trained by his own mentor?  And what is the role of the lovely Mary Higgins, the sister of one of the union organizers?  Combining both emotional investments with a mile-a-minute pacing, Scott once again delivers a breath-taking race through history at the same time making it come alive for today’s readers. It isn’t often that a thriller provides us with a genuine glimpse into tragedies and glories that made this country great.

“The Striker” is another great addition to the Isaac Bell series and we’re already anxious for the next one.  Major thumbs up here, loyal readers.
Posted by Ron Fortier at 10:04 AM

As I written before, I LOVE the Isaac Bell series. I listen to them, and the narrator, Scott Brick, is perfect for the series. With only a limited number of Bell books, I read about one a year. Someday, I might just blow through all published books and be eagerly waiting for a new one each year.