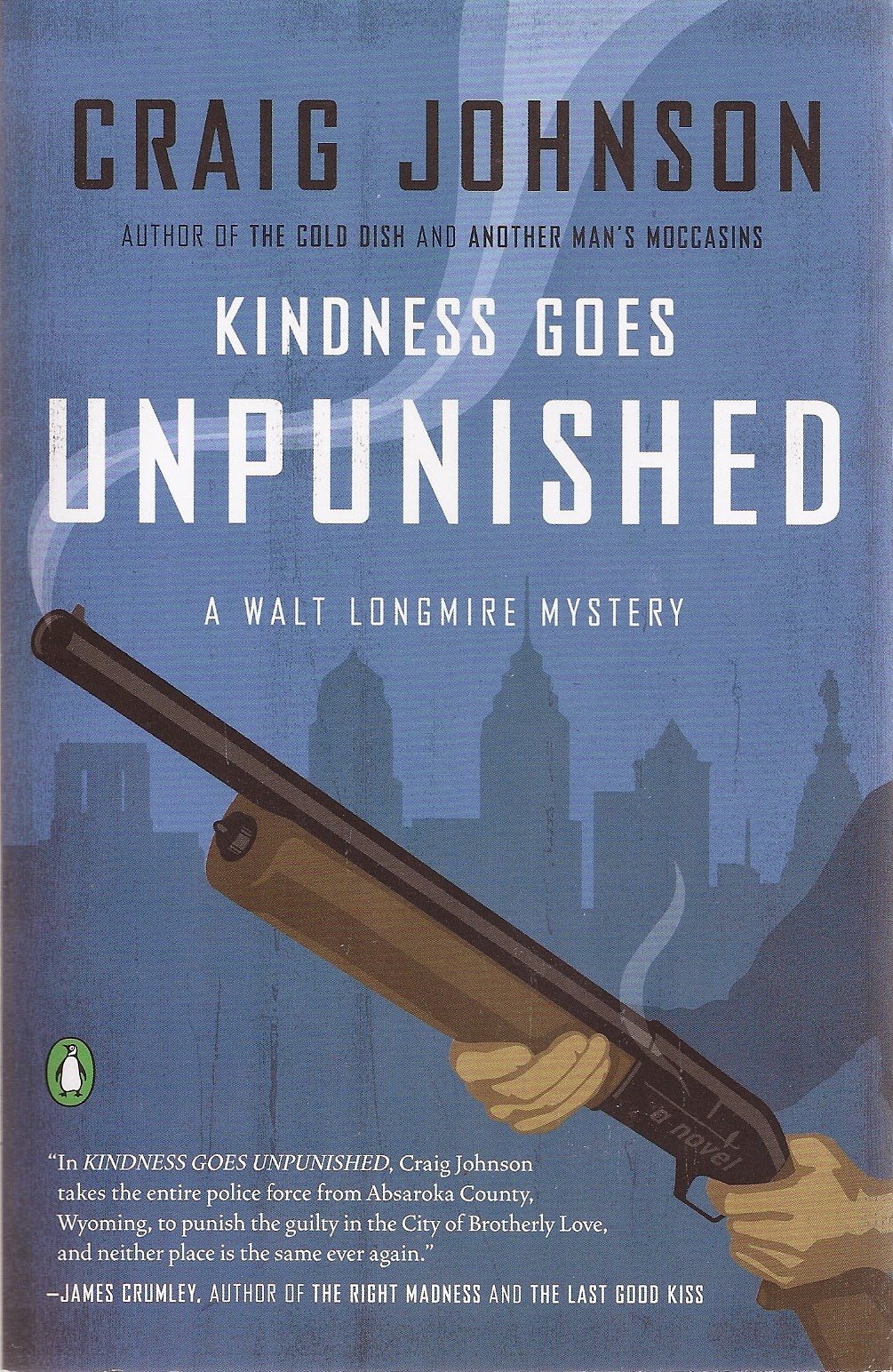 I’m not a hundred percent sure, but I believe this is the third book in the Walt Longmire series by Craig Johnson.  I’ve read, and reviewed several others and enjoyed them tremendously.  Not reading the books in the proper sequence can have an unsettling effect.  Somewhere in one of those I’d already finished, references were made to Sheriff Longmire and his crew having visited Philadelphia, Deputy Victoria Moretti’s home town.  As it turns out, KINDNESS GOES UNPUNISHED is that particular adventure and as such it really an odd duck chapter in this generally superb mystery series.

The charm of the Longmire books, as I’ve said in those past reviews, is their authentic Wyoming setting.  Wyoming’s rugged, sparse, often times brutal nature, is a real character in the tales and such an integral element that its absence in this book is sorely felt.

As the tale opens, Walt Longmire and his good friend, Henry Standing Bear travel to the City of Brotherly to visit Longmire’s daughter, Cady, an attorney who has just gotten engaged.  They arrive in the city and are just getting settled in when Cady is knocked down a flight of cement stairs by an unknown assailant and the first time her father sees her is in the hospital after coming out of surgery.  She is in a coma and the chances of her recovering are slim.  Nobody writes emotional scenes like Johnson and he brilliantly captures the agonizing suffering Longmire endures throughout the remainder of the story as he fights desperately to cling to even the slightest glimmer of hope.  It is impossible for this man, already a widower, to imagine his life without his beautiful daughter.

Slowly, but methodically, Longmire gets involved with the investigation into his daughter’s attack and quickly allies himself with two very smart and dedicated Philly detectives.  The pacing is brisk.  When Longmire learns that Cady’s fiancé, a lawyer named Devon Conliffe, is involved with a local drug cartel, he naturally suspects him of being connected to the attack but before he can begin his investigation, Conliffe is murdered.  From this point on, bodies begin to pile up and Longmire and the cops find themselves racing to find a mysterious witness who supposedly has all the pieces to the puzzle.

Please don’t get me wrong here, KINDESS GOES UNPUNISHED is an excellent read and worth your attention.  But in this humble reviewer’s eyes, it doesn’t come close to the others in this series.  You might be able to take cowboy out of the west, Craig Johnson, but in the future, please don’t take the west out of the cowboy.
Posted by Ron Fortier at 11:45 AM