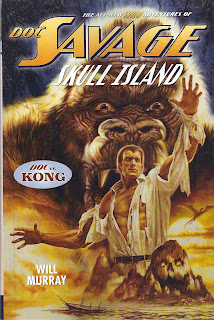 Pulp writer/historian, Will Murray, is no stranger to writing Doc Savage adventures.  He’s completed many from plot notes left by Doc’s creator, the late Lester Dent, all to critical praise from pulp fans across the world. But this reviewer never saw those as “originals” being that Murray was following Dent’s plots and not really coming up with his own ideas.  As Murray is a proven storyteller, this reviewer continued to hope that one they he would give us that Doc Savage adventure born solely from his imagination.  “Skull Island” is that book and it was worth the wait.

The book begins with the aftermath of the events portrayed in the classic RKO movie, KING KONG, with Doc returning to New York to discover the remains of a giant gorilla covering the streets beneath the Empire State Building in which he has his offices.  He then offers his services to city officials in regards to disposing of the behemoth’s remains.  Soon, with the assistance of his loyal companions, Monk and Ham, the body of King Kong is prepared and loaded on the tramp steamer that first brought it to the Big Apple.  As the ship sails away to return to corpse to its home on Skull Island, Doc tells his friends this was not the first time he had set eyes on Kong.  Naturally curious, they request he tell them of that meeting and thus Doc relates his yarn and we are sent back in time to what has to be considered Doc Savage’s first true wild adventure.

Upon his discharge from the military at the end of World War One, young Clark Savage Jr. is summoned to San Francisco by his father, Clark Savage Senior where is wait with an all Mayan crew of sailors aboard his lavish yacht, the Orion.  Captain Savage is about to undertake a quest across the uncharted waters of the Indian Ocean in search of his own sire, Stormalong Savage. The master of an old Yankee Clipper called Courser, Stormalong and his crew had disappeared eight years earlier and Doc’s father is obsessed with learning the fate of the old seaman.

That is the surface narrative that propels the physical adventure but Murray deftly employs to tell the underlying tale; the delicate relationship between Doc and his father. In doing so, he explores the mystery that has plagued pulp fans for decades; what actually compelled Savage Senior to have his one and only son molded, via various tutors, into a veritable superman?  There is a gaping relationship distance that exist between the two as young Clark tries to deal with his father’s decisions that kept them virtual strangers most of his formative years.

By the time the two of them find Skull Island while battling South Seas island headhunters and the giant gorilla called Kong, the action sequences seem like oddly written after thoughts. They come and go like a pointless carousel useful only in filling pages and carrying us to the ending. As a traditional pulp adventure, “Skull Island” is a mediocre effort that never achieves its clearly imagined potential.  Whereas its look back at the character of Clark Savage and his devotion and loyalty to his obsessed father is the true treasure of this book; one we truly believe Lester Dent, had he been given the opportunity, would have relished writing.  For that fact alone we say, thanks Will Murray for filling in the gaps.