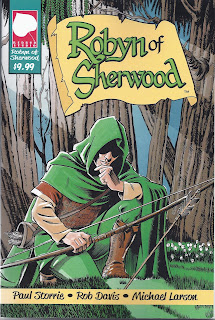 One correction, Ron. Michael Larson is not the letterer, that was Thom Zahler. Michael Larson was the artist on the original first issue of the series and did a lot of the original design of the costumes and layouts for that first issue (which I followed in order to speed the process of re-doing the first three issues). He's considered a co-owner of the series tho' his contribution to the graphic novel is reduced. He was to have done a painted cover for the GN, but could not complete it in time for us to publish the book in order to establish trademark on the series name. Thanks for the great review!

Thanks for that correction here, Rob, much appreciated. Really don't ever want to slight an creator.

Interesting observation you make about self-published independent work. I suspect this will trigger another golden age of pulp over time. That said, this looks like a tremendous book.