RUNNING DOWN THE VOODOO 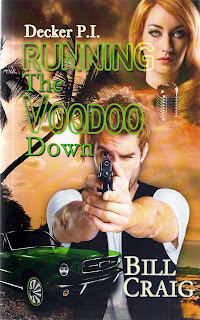 This is writer Bill Craig’s sixth Sam Decker novel and it rocks.  Decker is a private investigator living in the Florida Keys and he’s one tough customer.  A former Drug Enforcement Officer, he despises incompetence in police work almost as much as corruption.  When beautiful young jazz singer, Carly Kinnebrew, is kidnapped after a performance in a Miami nightclub, the police ineptly handle the case believing the woman has merely fun off on some private escapade.  When Decker is called into the affair, he immediately uncovers multiple clues that point to kidnapping.  But not just a routine kidnapping for money.

In his investigation, Decker learns the singer had been the victim of earlier abduction as a young child in New Orleans.  There she had been sexual abused by a very twisted voodoo practitioner known only as the White Orchid Man.  Only by her strength and will to survive had the girl managed to finally escape her captor and return home.  When the police failed to track down the fiend, she and her mother went into hiding and the scarred child changed her in name in hopes the White Orchid Man would never find her again.

Alas, Decker quickly comes to the conclusion that very horror has transpired and he goes into action, enlisting his circle of friend, both official, ala Police Chief Monica Sinclair, and private such as fellow P.I. Rafael Cortez and the massive Indian shaman Seminole Joe to aid him in finding Carly and help him save her from a truly horrible fate.

Bill Craig’s writing is lean and mean.  He waste very few words on extensive exposition, giving you a character or setting in economic phrases without slowing down his breakneck pacing.  There are amble action scenes that propel this caper like majestic white water flowing over rocks.  “Running Down The Voodoo,” is a terrific read and a wonderful introduction to a memorable cast of characters.  Trust me, pick up this title and you’ll soon be hunting up the previous five Sam Decker books.  It’s that good!