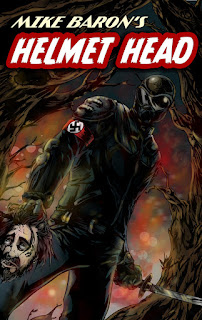 While new to the world of prose fiction, Mike Baron is a name well known to comic fans. Since the early 1980s, Baron has created unique and out-of-the-norm characters like Nexus, an intergalactic assassin dressed like a superhero, or The Badger, an adventurer with multiple personality disorder surrounded by a strange cast of characters .
As he enters the world of prose fiction, he brings that same mix of genres with oddball characters in to his debut novel, Helmet Head. The novel proves to be a crazy mix of pulp and thriller fiction with the genre surroundings of 70s exploitation cinema.
Our nominal lead is Pete Fagan, a motorcycle riding deputy in rural southern Illinois. His first days at the new job quickly turn bad as he not only ends up a witness to a murder, but also as a potential victim to the killer, an urban legend come to life.
Helmet Head is a massive beast of a biker, towering over all around him. Dressed in black, he carries a massive katana and uses it to murder his victims with one clean swipe through the neck.
Fagan quickly stumbles in to a biker bar called the Kongo Klub, home of the Road Dogs, Helmet Head’s chosen targets over the course of the book. Already injured, Fagan stays behind as the Road Dogs go after the killer. He quickly forms a bond with Macy, old lady of the club’s president, even as the Dogs start to die in grisly manner.
Baron keeps the action going at a breakneck pace throughout the novel, never slowing down to let a reader even catch a breath. He expertly gets us in the head of each of his characters, even if it is only seconds before they meet a horrible fate.
The end barrels forward as Fagan searches out the secrets of Helmet Head, and uncovers even stranger tales in the process. Ultimately, Fagan ends up in a fight for his life with the man behind the helmet in a stunning climax.
Helmet Head is a quick, action packed read for a fan of action, tale-spinning and iron horses. Baron seems to know what he’s talking about when it comes to motorcycles and fans of Sons of Anarchy will find something to love even in the more reprehensible members of the Road Dogs.
Helmet Head is available from Amazon in both hard-copy and in ebook format.

It's available in paper!

How did you know it was me? I am anonymous!

The Badger was the best comic ever. I hoard mine like treasure. I'll get this solely because Mr Baron wrote it.

Dang, my fanboy is showing...