JUST BEFORE THE DAWN 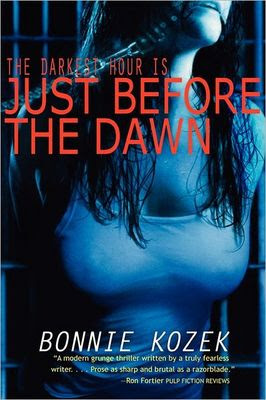 JUST BEFORE THE DAWN
By Bonnie Kozek
Legacy Publishing LLC
177 pages
A while back I read a book called THRESHOLD that impressed me greatly.  It was modern day, grunge thriller written by a truly fearless writer.  Kozek’s prose, like her protagonist, Honey McGuiness, is not for the faint of heart.  Honey is a broken soul, abused constantly by her father as a child, tossed from one foster home to another; her life has been nothing but a constant swim through the sewers of society.  In that first outing, Honey, with the help of a selfless, naïve police officer, helped topple a corrupt administration and almost got both of them killed in the process.  By the book’s end, she was packing it up for parts unknown.
Which, as it turned out, became an out of the way burg called Pie Town.  As this sequel opens, Honey is working in a restaurant/bar in the small hamlet and slowly getting accustomed to the eccentricities of the colorful locals.  Still there is a recurring oddity about Pie Town, all its young people run off the second they finish high school, leaving the town to children and seniors.  But Honey isn’t a private eye and solving mysteries really isn’t her thing.  Getting by is and as a expert survivor who has taken the worst this world can dish out, she’s lulled herself into thinking Pie Town is a safe, boring corner into which she can crawl and disappear.
Sadly that assumption is the furthest from the truth.  Pie Town harbors a dark and unholy secret and when Honey is kidnapped by a psycho killer operating a sex cult in the nearby woods, she begins a descent into a drug induced hell that is both horrifying and mind-numbing.  Kozek doesn’t spare any of the details of Honey’s sexual degradation and continues to explore her twisted, wounded psyche every painful step of the way.  This book is one woman’s personal journey to that hell and the writing is as sharp and brutal as a razor blade.  It cuts…often.  Still, it is never sensationalized and believe me, that is incredible.  Oh, I am positive there will be readers and critics who will decry it as such, calling the shock-value a gimmick.  They’re wrong.  Like any exploration of the human condition, one has to peel away the layers to find then gristle and bone beneath.  That process is never pretty.  It is real.
And despite its in-your-face portrayal of abject cruelty, JUST BEFORE THE DAWN manages to find a glimmer of hope and salvation at its conclusion.  It may be fragile at best, but then again, in the real world, there are no guarantees.  Each of us gets by, if we’re lucky, with a little help from our friends.  Honey McGuinness is one of the most memorable characters you will ever encounter, if you’ve got the fortitude to take the trip.
Good luck.
Posted by Ron Fortier at 6:59 PM