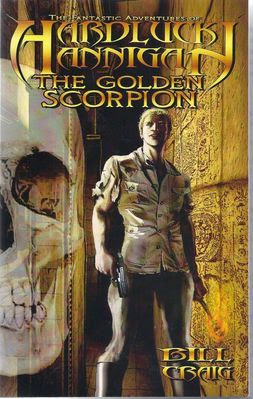 The Fantastic Adventures of
HARDLUCK HANNIGAN
The Golden Scorpion
By Bill Craig
Cover by Laura Givens
Ever since starting this column, I’ve reviewed many small independent books but all of them were in one fashion or another associated with either a publishing group or writers’ organization. They all had ISBN numbers, a website or link as to where their books could be purchased. Bill Craig’s offering here has neither, no ISBN, no website address and no page numbering. I can’t even tell you how many pages there are in this great little book.  This book exemplifies self-publishing to the maximum understanding of that process.  This book was written, assembled and printed by Bill Craig. Happily, I’m informed that all of Craig’s books are available at Amazon.
Despite the book’s amateurish production values, Craig is really a very competent writer who excels at fast paced action.  He is most assuredly a new pulp writer worthy of your attention and one of the most prolific working today.  The Hardluck Hannigan series is only one of several he has invented and continues to pump out at a rather remarkable rate.  Understand, Craig’s purple prose is masculine and he waste no time jumping into each book’s plot with little fanfare as to who these characters are or where they’ve been up to this point in their lives.
The Golden Scorpion opens with Michael Hardluck Hannigan in Cairo having just completed an adventure in Africa.  At the bequest of his Russian buddy, Gregor Shotsky, they go to meet an unscrupulous dealer in antiquities who has information on the whereabouts of an ancient mystical artifact known as the Golden Scorpion.  The Golden Scorpion supposedly is a powerful arcane weapon of some kind said to be buried deep in the sands of the Sahara.  Within minutes of meeting this fellow, Hannigan and Gregor are attacked by Tureg warriors, the merchant is killed and they escape with their lives and a new ally, a lovely American secret agent named Chas Ridings.
As I said before, the action never lets up and all too quickly we learn Hannigan is being pursued by a secret cult of desert warriors, a Chinese master criminal and members of the Illuminati based in England.  A great deal of Craig’s writing is reminiscent of Lester Dent’s classic Doc Savage stories in that Hannigan seems to be always accompanied by an eclectic group of aides made up of assassins, soldiers of fortune and brilliant scientists answering the siren song of adventure.  Throughout their madcap race across the burning sands, battling both human and inhuman foes, Hannigan and company press on while Craig occasionally drops information concerning their previous exploits that led to their current predicament.  It is both frustrating and intriguing at the same time.
The Golden Scorpion is a quick read that left me wanting a whole lot more.  If you haven’t heard of Bill Craig before, then you need to remedy that. He’s a damn awesome pulp writer who knows how to spin a yarn.