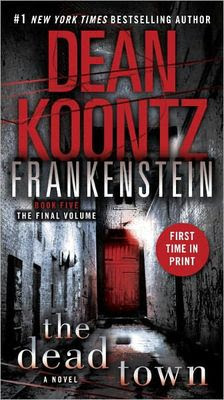 FRANKENSTEIN
The Dead Town
By Dean Koontz
Bantam Books
402 pages
Seems like there is a new trend in wrapping up great, fantastic literary journeys.  The folks at Warner Brothers wisely split the last J.K. Rowling Harry Potter book, “The Deathly Hollows” into two truly amazing movies, the finale now showing in theaters everywhere is a superb adaptation of the book’s climatic ending.
Likewise writer Dean Koontz went deliriously overboard in relating the final conflict between the mad scientist Victor Frankenstein and his pathos filled creation, the so called “monster” now known as Deaucalion and offered it to his legion of fans in two parts.  “Frankenstein: The Dead Town” is a truly fitting resolution to not only the first part of the narrative, “Lost Souls” but the entire five book series.
One of the common traits of most successful pulp writers today is that they are prolific.  The tons of words they produce daily is staggering and would make the old pulp writers proud.  Koontz is no exception in this ability.  Whereas being fast does not assure quality, only a professional competency his readers have come to expect.  Of all his series, the new Frankenstein books are easily some of his most enjoyable action heavy offerings yet.
In part four, “Lost Souls,” the town of Rainbow Falls, Montana, was being invaded by clones created with super nano-technology in a hidden missile silo long abandoned by the military.  The twisted genius behind this assault on humanity was the surviving clone of the first Victor Frankenstein; his goal, the complete eradication of all life, human, plant and animal, on the planet. Battling him at every step is Deucalion, that stitched together protagonist.  Whereas in this series, he is a near indestructible superman who has developed a truly beautiful soul and is determined to fowl his mad creator and save the world.
The fun of this, and the previous volume, is the eclectic band of town citizens, all of them unique, eccentric characters in their own right, who ultimately band together as Deucalion’s army and bravely aid him this apocalyptic battle that has the fate of all mankind resting on its outcome.  Koontz is truly a master tale spinner and in “Frankenstein – The Dead Town,” he is at his best.  And that’s saying a lot!
Posted by Ron Fortier at 9:06 AM