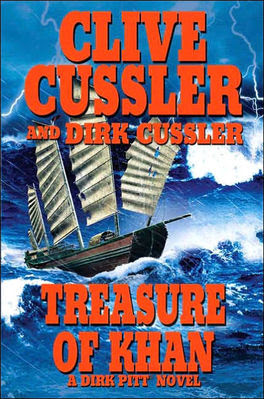 TREASURE OF KHAN
By Clive Cussler & Dirk Cussler)
Berkeley Books
604 pages
In this, the 19th book in the Dirk Pitt adventure series, the head of Numa and his loyal sidekick, Al Giordano find themselves in the wilds of Mongolia battling a descendant of the world conqueror Genghis Khan who has harnessed a machine capable of creating earthquakes.  These he uses to disrupt the world’s fuel distribution.  Once again, Cussler’s modern day pulp hero faces overwhelming obstacles to thwart the villain and in the end discover the long lost graves of both Genghis and Kublai Khan.
This is the second Pitt adventure Cussler has co-written with his son Dirk and comforts a legion of fans in knowing the character will most likely continue long after his creator had retired.  For those who believe the pulps died out long ago, pick up any Dirk Pitt title and get ready for a truly amazing ride.
Posted by Ron Fortier at 3:52 PM