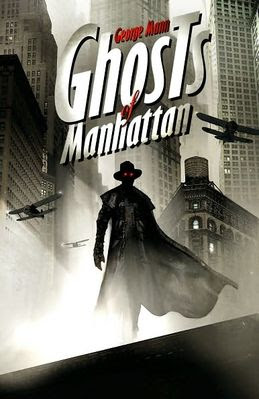 GHOSTS OF MANHATTAN
By George Mann
Pyr Books
236 pages
If anyone doubts there is a major renaissance in pulp fiction going on today, then let them pick up this old fashion thriller.  George Mann has delivered a very typical pulp avenger story with an added twist of steampunk.  If you are unfamiliar with the term, steampunk refers to a technology based on steam power as was first developed in the 19th century focusing in large part to Victorian Era Britain.  It is a subgenre of science fiction and often used in alternate world settings.
The year is 1926, shortly after World War One.  All transportation is steam powered including automobiles.  Tesla coils light up cities and viewing tube-telephones are familiar household appliances.  Police dirigibles patrol Manhattan’s canyons and bi-planes docked on rooftop rocket launchers are part of the city’s skyline silhouette.
Gabriel Cross is a disillusioned, wealthy veteran living on his vast estate on Long Island.  Bored with his life and the shallow social circles he inhibits, Cross dons special night goggles, rocket boots, a dark trench coat and slouch hat and becomes the urban vigilante known as the Ghost.  It would be impossible for any pulp fan not to recognize the Ghost’s pedigree, he is an heir to such classic pulp avengers as the Shadow and the Spider and dozens of others who emerged from pages saturated in purple prose.
Of course you can’t have a good pulp hero without an equally impressive pulp villain.  In this tale he is a mysterious fiend known as the Roman.  The police christened such because he leaves Roman coins on the eyes of his victims, all of whom are prominent public figures.  As the Ghost begins his hunt for the Roman, he finds himself distracted by two other players in the game.  One is the tenacious police detective Felix Donovan who has been charged to apprehend both the Ghost and the Roman.  The other is a beautiful jazz singer named Celeste Parker with whom Cross is enamored.
At first Celeste appears to be merely a love interest whose insight into Cross’ wounded soul slowly begins to heal him.  But when a group of the Roman’s henchmen attempt to kidnap her one night, the Ghost is dealt another mystery. Who is she really and what is her importance to the Roman?  These are but a few of the elements that add cleverly written layers of suspense to an action packed adventure.
GHOSTS OF MANHATTAN, with its colorful steampunk setting, wonderfully echoes the exuberant fun of the original pulps.  In the end it is a romantic tip of the fedora to those times long passed but never forgotten.
Posted by Ron Fortier at 10:25 AM

Looks like a decent bit of pulp hero fun. The cover art reminds me of Sky Captain and the World of Tomorrow, not a great movie, but certainly a great looking movie. It also makes me think of The Grey Ghost, a character from Batman: The Animated Series.

Thanks for the review. I need to check his one out.

Thanks for dropping by, Matt.
Since reviewing this, GHOST OF MANHATTAN is one of the five nominations for the Pulp Factory Awards for Best Pulp Novel of 2010.
Winners will be announced at this year's Windy City Paper & Pulp Show.
Oh, and a sequel has just been published is due to be released any day now.