EEREY TOCSIN ON THE UNDERWATER ISLAND 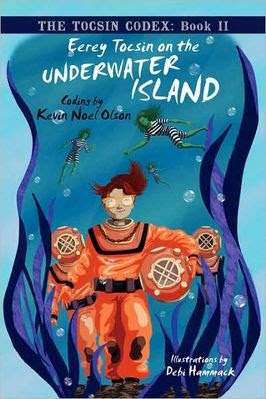 EEREY TOCSIN ON THE UNDERWATER ISLAND
By Kevin Noel Olson
Cornerstone Book Publishers
153 pgs
Several years ago, Kevin Noel Olson wrote one of the most imaginative Young Adult book I’d ever read, “Eerey Tocsin in the Cryptoid Zoo.”  In it the world met Eridona “Eerey” Tocsin, a precocious red headed girl with a knack for meeting and making friends with all manner of weird creatures.  From her black widow spider, Eight Ball, to the Loofah, the half centaur/half orangutan, this girl was a magnet for some truly amazing adventures.
Olson has since written two sequels that have been sitting on my To-Read stack for some time now. Sadly we reviewers do not spend all day reading, as much as we’d like to.  There are things like gas and light bills to pay, i.e. the regular obligations of life.  Whereas ever day more and more books arrive and that stack never seems to dwindle at all.  So it is just matter of spacing out titles and offering myself and you a diverse line-up of reading experiences.  It was time for Eerey’s second book.
At the end of that first tale, Eerey and her strange companions were flying off to try and locate her missing parents.  Along with them was her cousin Edict, a boy covered with hair and Guy, the invisible lad who buzzes whenever he comes under harsh lights.  They crash land near a dormant volcano in the middle of the ocean and soon find it leads to the underwater city of Kanute.  There, the group is caught up in a battle between the green skinned humanoid Kanutians and the amphibious Ottermen.
Once again, Olson delivers a completely original story filled with giant robot sharks and an even bigger, miles long crustacean known as the Kraken.  The action never stops as Eerey and her pals find themselves in one cliff-hanger peril after another, all the while relying on their courage and friendship to see them through. Which is the true heart of these adventures; that no matter how amazing or frightening life can be, we all do succeed with a little help from our friends.
Today’s Young Adult book market is overflowing with hundreds of titles but very few are as creative, exciting, original and as much fun as this little known series.  It truly deserves a much greater audience and hopefully this review will guide more readers to it.  I’ve already purchased a second set of all three as a gift to one of my granddaughters for Christmas.  If you’ve dedicated young readers in your family, you’d be smart to do the same.  They’ll thank you for it.  Finally, with a little luck and free time during the holidays, I’ll be digging into that third volume, “Eerey Tocsin and the Invisible Tower.”
Posted by Ron Fortier at 9:54 AM