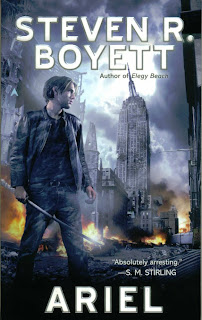 ARIEL was Boyett’s first novel and was released way back in 1983. It launched his career and became a cult favorite amongst sci-fi and fantasy readers. The book wraps up on an open-ended line that indicated there would be more adventures to come. Now, after twenty-six, a sequel has been delivered in hardback called ELEGY BEACH occasioning the re-lease of this new paperback edition of ARIEL. I’m eager to get to it, as ARIEL is truly a remarkable, entertaining adventure book that doesn’t disappoint. If you’ve passed it over all these years, undecided whether to give it a go, hesitate no longer. ARIEL is simply a terrific book.
Posted by Ron Fortier at 8:08 AM

For some reason, I remember an earlier sequel.. like late 80s or early 90s? It wasn't that cool. So maybe this new sequel is a ret-con of the earlier sequel, or takes place after that?