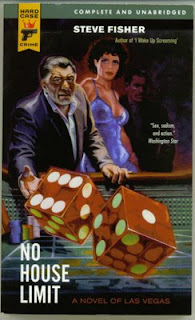 HCC promotes this particular book on the front cover as “A novel of Las Vegas.”
Which is exactly what this is, a time-capsule look back at the glitter capital as it existed back in the 1950s, long before the city powers opted to make it a family-friendly vacation destination.

Joe Martin is an army veteran who owns and operates the Rainbow’s End casino without any help from the syndicate. He is an annoyance they want eliminated. They hire a big time gambler named Bello to break the house; that is winning all the casino’s funds in a marathon game of craps. Martin is no naïve rookie and long before Bellow sets foot in his establishment, he becomes aware that an assault is imminent. Martin’s fear is that while he is dealing with the mercenary high roller, the syndicate will attack at him on other fronts.

Luckily, Martin has two loyal friends who won’t let that happen. The first is Sprig, his tough chief of security and Mal Davis, a lounge singer/pianist who is afraid his career is going nowhere fast. As the syndicate unleashes its various strategies to bring down Rainbow’s End, both Sprig and Davis soon find themselves soldiers in Joe Martin’s war.

Then, as if things couldn’t be more tense, enter Sunny Guido, a beautiful grade school teacher from California who entrances the cynical Martin and first time in his life has him experiencing love. But is she the real deal, or clever plant sent by the syndicate to mess with his mind?

I’ve personally never had any desire to gamble nor visit that glitzy city out in the middle of the Nevada dessert. Still, after reading this excellent story, I can better appreciate the fascination of people for this one-of-a-kind sin city. Fisher creates truly great characters and drives his narrative with ease, building suspense slowly until the finale erupts across the last chapter like a breath of much need fresh air. NO HOUSE LIMIT is a gem of a book and I recommend it highly.
Posted by Ron Fortier at 11:03 AM

I also enjoyed this book. I appreciate many of the HCC titles whether they are vintage reprints (like this excellent example), or new noir outings.

There is something special about finding these stripped down gems - antidotes to all the high-tech, here’s-how-you-change-the-oil-in-a-submarine technobabble, wooden-charactered, missing-historical-keys-to-the-end-of-the-world, non-thrilling thriller novels currently inundating the bookshelves.

Ha, couldn't have said it better myself. HCC hits the bullseye almost every time.