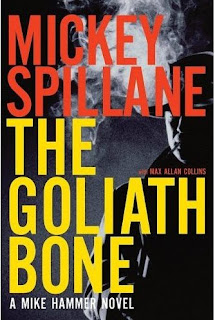 You would have expected the father of America’s toughest private-eye to go out with a bang! And he does, in this, one of the two remaining Mike Hammer books Mickey Spillane was writing at the time of his death. Thankfully his close friend, and literary protégé, Max Allan Collins was on board to complete them. It’s a loud bang of action, humor and a long fulfilled romance that had me hooked from page one.

Nobody wrote tough-guy pulp like Spillane. It was a talent that never left him over his sixty year career as a crime writer. Mike Hammer is out and about on a cold New York City winter night when trouble comes calling in the form of two young people hurrying down the street unaware they’ve picked up a menacing shadow. Never one to mind his own business, Hammer takes off after them and their mysterious pursuer and arrives in the nick of time to save them from being gunned down. Hammer never goes anywhere without his trusty Colt .45 automatic. With a dead man at his feet, and two frightened innocents, Hammer whisks them off to the security of his office and thus the tale begins.

The would-be victims are college sweethearts recently returned from a trip to Israel. After camping in the Valley of Elah, the two accidentally uncover a human femur bone the size of a railroad tie. They believe it to be the only remains of the biblical Philistine giant, Goliath. The couple, Mark and Jenna, smuggle the bone out of the country by mailing it to a friend back home. Once back in New York, they retrieve it and are on their way to the university to deliver it to their respective parents who are both archeologists. Thus ends their tale at the point of being attacked by the unknown assassin and Hammer’s timely appearance. Hammer immediately realizes the political implications of their discovery and the dangers they entail, to include the botched murder attempt.

Leave it to Spillane to deliver a topical thriller, post 9-11, with Hammer ready to take on Islamic terrorists all by his lonesome. The plot moves at a fast clip and before long Hammer is embroiled with foreign dignitaries, government agents and criminal arms dealers, all the while having to protect the two young lovers. Thus the subplot of his long overdue marriage to Velda, his gorgeous, loyal secretary is truly poignant. Ever the skilled story-telling magician, Spillane pulls a few aces out his sleeve, including the reason why it has taken Hammer so long to make an honest woman of her. Their marriage and honeymoon adds a fitting chapter to Hammer’s last case. The feelings of these two characters, their enduring love and its joyful resolution reminded me of what William Faulkner called “…the truths of the heart.”

But worry not, pulp fans. Before the two can sail off into the sunset, there is still the matter of a ruthless killer who has left a trail of bodies for Hammer to follow like a grisly invitation to a climatic showdown. Mike Hammer never walked away from a case until justice had been meted out; the kind dispensed from the barrel of his .45. THE GOLIATH BONE is no exception. This is one hell of a ride you do not want to miss!
Posted by Ron Fortier at 4:37 PM

Thanks for the great review.

For the record, while Mickey was indeed working on two Hammer novels at the time of his death, he also had three other Hammers in the form of substantial manuscripts that he had put aside. Two are from the mid'-'60s and one is from the '90s. These are among the books he asked me to finish. There are also half a dozen smaller fragments of Hammer novels (first chapter or two plus plot notes). The Hammer I'm completing right now is called THE BIG BANG is one of the '60s novels. Following that will be KING OF THE WEEDS, the other Hammer book he was working on at the time of his death. If these are successful, the other two substantial manuscripts will be completed -- COMPLEX 90 and DEATH TROPHY. By "substantial," I mean half a book or more and plot notes. GOLIATH BONE, however, was intended by Mickey to be the last Hammer chronologically, and I have honored that.

Great review. I've actually never read a Mickey Spillane Mike Hammer novel but I'm familiar with the character from the TV show starring Stacy Keach. And just last week I saw THE GIRL HUNTERS which I think may be the only movie where a writer played his own creation. I thinking it's time for me to read the books and catch up on what I've been missing.

Hi Max, thanks for stopping by and filling us in. But more importantly,
thanks for the great job you've done
here with completing these books.
Mickey was really lucky to have a fan and friend like you, sir.

DL, thanks as always for stopping by.
I envy the fun of reading your first ever Mike Hammer book. And just a suggestion, but start with the first one, I,THE JURY, and read them in order if possible. You are in for a real treat.

Can't wait till this comes out in October.