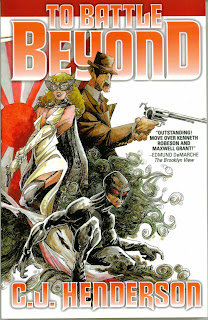 Henderson is brilliant at capturing personalities with only a few words and I found myself seeing these familiar heroes in an entirely new and exciting new light. The interaction between them is fun and as always C.J. doesn’t scrimp on the action. There’s plenty of it, all in the rousing traditional bloody pulps mode. So if, like me, you truly enjoy pulp action and adventure, pick this one up. Oh, and did I mention it has an introduction by some pulp fan named Fortier?
Posted by Ron Fortier at 7:34 AM