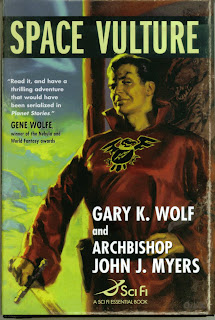 Well, I'm sold. When you add SPACE VULTURE to the announced comic book revivals of Buck Rogers, Tom Corbett and Flash Gordon, we may be looking at a resurgence of old school space opera...

Amen to that, Bill. It's certainly has my vote. Space Opera was always
the put-down stepchild of sci-fi
and I for one am glad to see it finally appreciated for the true entertainment it provided, then and now.

I just finished SPACE VULTURE about a week ago and I got nothing but joy out of reading it. Thanks for steering me to it, Ron!

DL, as I look back on this reading year, SPACE VULTURE clearly stands out as the most fun read. I sure hope they do a sequel. We need more
old fashion space operas like this.