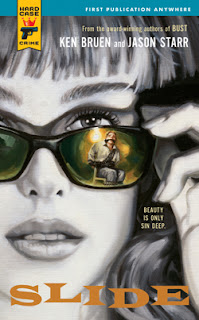 I'm eagerly awaiting this. I loved Bust, the first novel, and from this review it seems the boys topped themselves.

I'm waiting for Song of Innocence to come out on July 3.

I really enjoyed it. Angela was much less sympathetic in this book than in Bust. That's what made this book a success. Max is delusional as always, but Angela can't claim to be a woman wronged anymore, and she knows it.

Hoping for another sequel.

Your in luck, Glen. Hard Case Crime has announced there will be a third book in this series. Supposedly the plot involves Max's experience in prison. Sounds like another laugh fest to me.