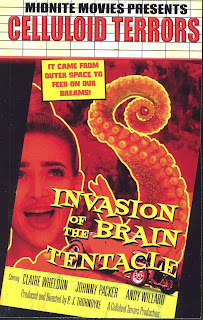 Scientist Claire Weldon and her family move to the small rural town of Ralston, California in the summer of 1957.  Daughter Judy and son Tommy soon find themselves embroiled with typical high school drama while stay-at-home-dad Ray Weldon is responsible for baby rose.  Everything seems to be going smoothly until a meteorite falls out of the sky one night and lands next to a series of water canals use to irrigate the local farms in the area.

What no one knows is the meteorite contained eggs for an alien life form that, after centuries of traveling through the cosmos, comes to life in the water. One ugly, octopus like creature that can sting humans with a mind-altering chemical that makes them its slaves. By the time Claire and Ray begin to suspect this fantastic threat, lots of the village’s most influential citizens have become the alien monster’s puppets.

If all this reminds you of the 50s and early 60s schlock sci-fi movie matinees, then you’ve just hit the bull’s-eye as that is exactly the tone writer P.J. Thorndyke is after and he achieves it beautifully. In the end, “Invasion of the Brain Tentacles” becomes a clever mash-up of “Invasion of the Body Snatchers” with “Happy Days.” Need we say more? Go find this pulpy horror romp. It’s just too much fun.