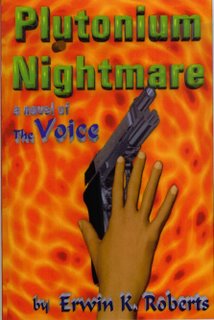 Over the years, many pulp writers have toyed with the idea of what a second generation of heroes would have been like. Take some of the old classic guys like the Shadow or Doc Savage and then imagine them settling down to raise a family. What kind of people would their sons and daughters have been? And more importantly, would they have followed in their parent’s footsteps and become crime-fighters too?

This book attempts to answer that question in that it introduces a disguise-artist-weapons expert hero who is clearly suppose to be the son of 30s super spy, Secret Agent X. And in that vein, it works exceedingly well. A mad villain has stolen 70 kilos of plutonium rich nuclear fuel and is going to blackmail the city for millions. If his demands are not met, he will release the lethal stuff via a dirty bomb that will contaminate thousands of people.

Enter the mysterious, no-face hero known by the police and public only as The Voice. Once again the pulse-pounding beat of classic pulp adventures is sounded, only this time in a more modern setting. And it all works. Roberts obviously knows pulps and captures their break-neck pacing perfectly, while at the same time adding in a heavy does of bloody, shoot-em-up action.

I am giving PLUTONIUM NIGHTMARE a thumbs up, but at the same time I am compelled to point out what I consider its one and only flaw. The book does not adhere to one narrative style. It jumps annoyingly between a third person story telling to a first person narration. I have never been a fan of this kind of writing as it always jars me out of the action. Roberts writes both well enough, and the last part of the book is almost entirely in the hero’s voice (no pun intended), but that doesn’t erase the earlier of moments of bouncing and back and forth. I would really love to see more adventures of the Voice, but please, pick one style next time.