SGT. JANUS on the DARK TRACK 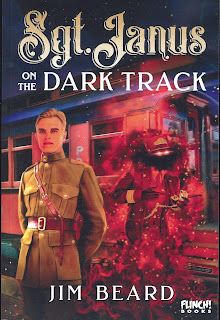 SGT. JANUS ON THE DARK TRACK

Six years after it was officially announced, book # 3 in the Sgt. Janus series by Jim Beard is at long last here. We are happy to report that the wait was a worthwhile one.

The adventure begins with Sgt. Janus and his companion, Mrs. Valerie Havelock-Mayer, on a train for home having just attended a conference for occult investigators.  Aboard the train is a politician named Clowers and his teenage daughter Laura. When Laura unexpectedly takes sick, Janus suspects she has been possessed by the ghost of another young woman whose own life ended tragically on that very train.

As his previous two books, Beard narrates the story from the first person accounts of the supporting players, never Sgt. Janus himself. Thus in the first half of the tale, Valerie’s diary entries share that task along with letters and notations by the other passengers including those written by the assistant conductor, Gabriel Butters. We soon learn that Butters has knowledge of an old African magic referred to as “the Dark Track.” Is the train itself haunted by the specter of a notorious outlaw and what was his connection to the ghost now controlling Laura?

To solve that mystery, Janus, Valerie and Butters decide to leave the train at a country station and proceed along the “Dark Track” on foot. This brings us to the book’s second half where becomes a whole lot more complex. The trio find themselves in what can only be described as an alternate timeline…as other people. If that wasn’t confusing enough, they are in Jordon, a small town dominated by the ironworks factory. It is the hometown of the dead girl; only here she is still among the living and the mystery of her actions and their repercussions to the events on the train only deepens.

Beard’s strength as a writer is his use of language to define his characters. It allows us an intimate glimpse as to their purposes and motivations. Sadly it is also his weakness as this attention to each individual flower fogs our view of the entire garden. Meaning quite simply that at the book’s conclusion neither the principle characters nor we readers are exactly sure what the actual resolution was. Much like H.P. Lovecraft, Beard is truly skilled at creating atmosphere and mood, which works beautifully in ghost stories but we would have appreciated a more defined conclusion. It is our one and only critique.

“Sgt. Janus on the Dark Track” is unique reading experience one the reader will not soon forget. 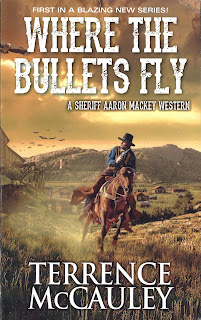 Ever since the emergence of the New Pulp movement several decades ago, we’ve noticed a resurgence in so many different genres of popular fiction long defunct. We’re not saying westerns ever went out of style; it is perhaps one of the more staple genres in American fiction. But it, like all the others, has had its ups and downs. There were decades when all one saw on paperback racks were westerns and then times when one was lucky to see a few Louis L’Amours. Those are cycles most readers soon become familiar with. As to the whys, that’s beyond this reviewer’s ability to comprehend. What we do know is that westerns are back in a big way and store racks are debuting new and exciting writers.

One such is Terrence McCauley who appeared on the scene only a few years ago writing suspenseful crime and spy thrillers. Knowing the author personally, we quickly became fans. Little did we suspect he was about to give us two of the best western heroes ever to appeare in print; Sheriff Aaron Mackey and his Deputy Billy Sunday.

“Where The Bullets Fly” is the first in the series and it kicks off with a bang. Mackey, a West Point graduate and former Calvary Captain, is drummed out of the army after his hair-trigger tempter gets the best of him. Thinking himself a failure, he returns to his hometown of Dover Statrion Montana. Accompanying him are his former black first sergeat Billy Sunday and old veteran scout Sim Halstead. Ultimately pressure from his Irish father and the town council get Mackey elected sheriff shortly after marrying a naïve young girl named Mary. She sees him as her knight in shining armor.

As the story opens, Mackey’s marriage is nothing but a convenience and his life has become routine. Dover Station, thanks to the railroad line, is beginning to grow and Eastern investors are seriously looking at helping that along. Mackey could care less. He’s content with keeping the peace whenever a few cowhands or miners get out of hand on a Saturday night. Then one day, five strangers ride into town and start start a ruckus at the Tin Horn saloon, savagely beating the owner and his bouncer. Mackey and Sunday attempt to arrest them only to have the drunken cowboys draw their six-guns and lead starts flying. When the gunsmoke clears, all five men are dead in the street and Mackey is left with mystery of who they were and why had they come to his peaceful town?

He soon learns the answer to that question in the form of a vicious killer named Darabond who commands a group of some fifty men hellbent on raiding and destroying any town they come upon. Now their target is Dover Station and they are about to fall upon it like human locust with only Mackey and his few allies to stop them. Suddenly, the ex-soldier is once again hurled into a bloody war and it will take all his skills and grit to save his home from the merciless raiders.

In Aaron Mackey, Terrence McCauley has created one of the toughest, most brutal and believable heroes ever to ride the wide open ranges. Once started, this was a book we just couldn’t put town. Sure, there are familiar tropes one expects in any western, but McCauley has the verve to shake them up and there are quite a few surprises in store for the jaded reader. This is one oater, you won’t soon forget. 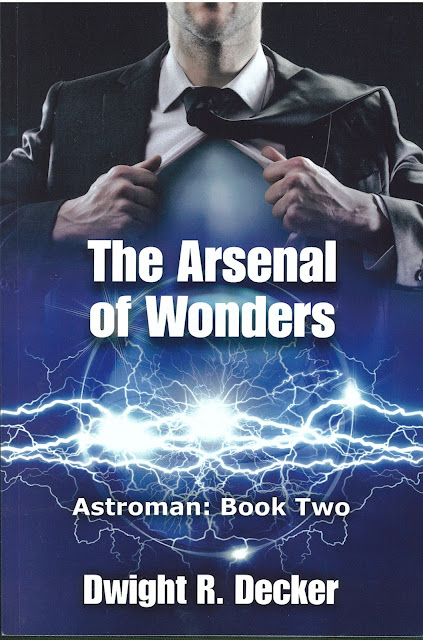 Book 2 - The Arsenal of Wonders

In 2019, writer Dwight Decker delivered “Astroman Book One – The Secret Citadel,” the first part of his rollicking homage to all the great comic book heroes including the Man of Steel himself, Superman. In that volume, Matt Dawson, a young physicist from our world is hurled into an alternate Earth where villainy and injustice is battled by a super being from another world named Astroman. As if that wasn’t spectacular enough, Dawson then discovers he possesses those self-same super powers as some kind of reaction of his being transported to this “other” Earth. Eventually he meets Astrogirl, the beautiful cousin Astroman. She confides in him that she and Astroman actually came not from an alien world, but the future where mankind has colonized another planet in a distant galaxy.

If that was shock enough, she confesses that Astroman is dead, a fact she has been keeping secret from the public. He was murdered by a genius evil scientist named Garth Bolton. By now astute readers translate that to Lex Luthor. Bolton has invented a weapon that can kill super being and if Astrogirl and Dawson have any hope of defeating him, they must travel back to the future to obtain an even more powerful weapon. Thus ended book one.

With book two, “The Arsenal of Wonders,” Dawson and Astrogirl arrive back at her homeworld and there experience several adventures. It’s all too clear Decker is giving us a grand tour of all the alien worlds that were prevalent in sci-fi paperbacks of the sixties and tips his hats to such authors as Edgar Rice Burroughs, Gardner Fox and Edmond Hamilton, among others. Eventually our heroic couple get the Super Neutralizer and return to Astro-Earth in time to stop Bolton from taking over America. Battles ensue and when Bolton commandeers an orbiting space station, things truly look bleak for our heroes.

If, like this reviewer, you grew up reading sci-fi paperbacks and comics in the 50s and 60s, “The Arsenal of Wonders” is going to be a truly pleasurable trip down memory lane. Yes, it is overly long in some places and could have been trimmed, but one can’t fault Decker for truly loving his subject and not wanting to leave anything out. In the end, we’re only too happy to give this a jolly thumbs up. Again, not for the everyone, but if you know who Ka-El really is, go grab a copy and enjoy.