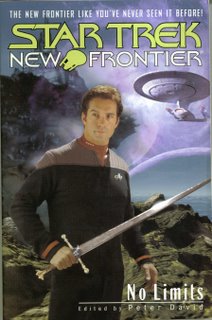 A while back I reviewed a Peter David New Frontier novel and made the claim that it is the best fictional ST series ever done. I stick with that claim and in a few short weeks will be reviewing David’s latest chapter in that enjoyable saga. Unfortunately what we have here is not as much fun.

And allow this reviewer a little second guessing as to the why of this particular anthology. Let us consider that my opinion is right and New Frontier is by far the best selling Star Trek fiction on the market. That being the case, it is only natural to imagine Pocket Books wanting very much to capitalize on this and increase their profits. But sadly there is only one Peter David and he can only do one book at a time. Of course the idea of doing other New Frontier books without him is ludicrous, and thank heavens these editors are smart enough to know that. Still there had to be a way to give readers “more” New Frontier while David busy writing whatever other things he writes?

The solution was obvious. Let’s do an anthology of short stories based on the colorful crew of the starship Excalibur and get David to edit it. That way the fans get more stories, we can more money and David is still on board. It can’t lose.

Economically, Pocket Books was right. Creatively is another matter altogether. There are eighteen stories in NO LIMITS. Of these, six are extremely well done; I’ll get to those in a minute. Eleven are mediocre, something no New Frontier tale should ever be, and one is just God awful. (No, I’m not being sacrilegious here…rather tipping my hand at which is the real turkey in this collection.) I also was very upset by the order of these stories. In one early tale a familiar officer aboard the Excalibur is killed in action but at the end of the book is a story wherein he is very much alive. Now considering that editor Keith DeCandido provides an official New Frontier Timeline as a special addendum here, you would think they could have put these two particular stories in the proper order. Sloppy editing, Mr. David.

If you are a completist and must have every Star Trek New Frontier book, then do check out those entries by David Mack, Kevin Dilmore, Peg Robinson, Mary Scott-Wiecek, Allyn Gibson and Peter David’s own, “A Little Getaway,” which tells the untold story of Calhoun and Elizabeth Shelby’s honeymoon. That gem is almost worth the price of admission.

Yes. This certainly wasn't the greatest book, but there are a few gems here.

Hi Bobby,
Always the one challenge of any anthology. Still, as I reviewed,
for folks who are New Frontier fans,
worth picking up. Am anxious to read the new novel in this series which I just picked up. Review to follow.

The latest novel was a good read. I really enjoyed it. New Frontier and the Deep Space Nine novels are really solid reads. I understand Peter david has a Next Generation novel coming this year as well.