MATTHEW HENSON and the ICE TEMPLE OF HARLEM 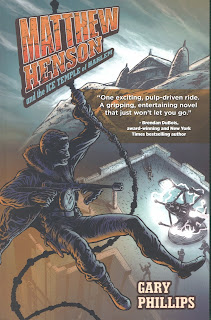 MATTHEW HENSON and the ICE TEMPLE OF HARLEM

In contemplating this particular review, we were reminded of the old McDonald’s campaign ad in which people were encouraged to increase their initial order from a simple burger and fries to Super-Size. Not that that was good for anyone’s overall health, but the idea of exaggerating something seems an appropriate theme here. You see,Matthew Alexander Henson (August 8, 1866 – March 9, 1955) was a real person. He was an explorer who joined Robert Peary on many Artic voyages over a period of twenty-three years. Best known for his part in the 1908-1909 expedition wherein Henson claimed to have been the first human to reach the geographic North Pole on April 6, 1909.

All of which describes a truly heroic character in the flesh. Now writer Gary Phillips has turned Henson into a bonafide pulp action hero; in other words, he Super-Sized him. And he did it with his usual writing flair and panache. The history setting is accurate throughout the book and it is obvious Phillips is having so much fun having Henson interact with such notable figures as crime boss Dutch Schultz and inventor Nikola Tesla. Focused on Harlem, characters like Langston Hughes and Bessie Coleman also appear and Phillips enjoys sharing little known facts about that part of the Big Apple during the post-World War One era. When reading historical pulp, and that’s what this is, we really appreciate these true facts.

The plot itself is a basic one. While on his last venture to the frozen North, Henson and a close Eskimo friend discovered a meteorite containing unbelievable energy. He is unclear as to what to do with the fragment he brought back with him. When he discovers certain unscrupulous men with money want to use it to power weapons of mass destruction, the world weary explorer is determined to thwart their plans. Thus begins a deadly hide and seek contest that leaves several people dead and threatens a horrific attack on a large public gathering where a noted black leader is speaking. Henson must convince his friends of the danger and recruit them to his cause in the hope they have time to avert calamity and save the day.

“Matthew Henson and the Ice Temple of Harlem” is a pulp romp, with a wonderful storyline filled with amazing characters, both real and fictional. Phillips, like the best musicians, never misses a beat between the drama and bullets flying. It’s a page turner from start to finish and we loved every bit of it.