COME SPY WITH ME 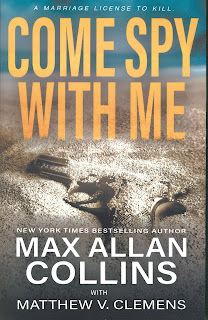 COME SPY WITH ME

Max Collins is one of those writers who is constantly surprising us. After decades of offering up great mystery and crime tales, he then had us cheering wildly for his western actioners courtesy of the late Mickey Spillane’s cowboy hero, Caleb York. Now comes super-spy James Bond’s clone, John Sand.

The setting is the early 60s and a British novelist has become famous by fictionalizing the exploits of M1-6’s operative, John Sand. Obviously with such notoriety, Sand’s effectiveness as an agent is compromised and as the story opens, he has retired and married the beautiful Stacey Boldt, the beautiful heiress to a Texas oil tycoon. If that sounds familiar, think George Lazenby and Diana Riggs, we certainly did. It is wish fulfillment ala what might have happened had she survived. This book takes us there and it’s a wonderful ride.

Sand is sincere in his desire to leave his dangerous career behind and pursue his new role as an executive in his wife’s business empire. This all goes awry when, while on a trip to Carribean, he becomes entangled in a political assassination. Within days he’s summoned by President John F. Kennedy to a clandestine meeting in the desert of Utah where a Frank Sinatra western is being filmed. Kennedy suspects rogue agents of the C.I.A. are planning on assassinating Fidel Castro. After the disastrous failure of the Bay of Pigs, the last thing he wants is another embarrassing incident pointing back to the U.S. Reluctantly Sand agrees to go to Cuba and see if there is any validity to the President’s claims.

As always, Collins’ use of the time and culture are spot on and add so much to the rich texture of his narrative. Ultimately Sand uncovers an even greater threat and upon reporting to Kennedy, is once again manipulated into being the President’s personal secret agent. If that wasn’t enough of a headache, Stacey demands to tag along. If her husband is going to continue leading a double-life, then he is going to do it with her or else he can pack his bags and kiss their marriage sayonara.

If like us, you grew up reading Ian Fleming’s James Bond adventures, “Come Spy With Me” will feel like old home week. Not a bad way to kick off a new series, Mr. Collins & Clemens. Not bad at all.