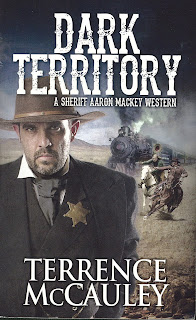 Series books are done in two ways. The first being each installment, though it might reference previous books, can stand on its own merits providing the reader with a beginning, middle and end. The second version is books are left with dangling plots forcing readers to pick up the next volume to see how things turn out.

In the first book of this series, writer Terrence McCauley gave is a tale that solidly adhered to option one; it stood complete by the finale. If we never bothered to pick up another Sheriff Aaron Mackey book, we would be okay with that. Whereas good writers generally do convince us to buy their future output. Which was why we went out and purchased the next three books in this series immediately, not wanting to miss any of them. We enjoy McCauley’s work that much.

Still, half-way through “Dark Territory,” we started getting that annoyed feeling that this one wasn’t going to wrap up by the last page. And we were correct in that assumption. It’s a cliffhanger that requires the reader to pick up the third book. Happy about that? Not really. But hey, let’s get to the actual plot.

Having saved the town of Dover Station Montana, Sheriff Aaron Mackey and his deputy, Billy Sunday, are concerned with how quickly the place is growing. This all due to investments by a rich New York financier named Rice. With the increased commerce brought by the railroad line, Rice sees economic potential and leaves his partner, Van Horn in charge of steering the town to its next level; one with lots of banks, hotels, restaurants etc. etc. In other words create a real boomtown. It is at this juncture that we are introduced to the story’s villain, an enterprising con artist named James Grant. Grant has a complex past having acquired multiple skills that allow him not only to manipulate others to do his bidding; he’s also ambitious and dreams of fame and fortune. All of which he’s going to obtain by becoming Dover Station’s Mayor and in so doing replace Rice’s vision with his own.

To accomplish this, Grant orchestrates Marxist inspired trouble among the construction workers and then hires men to rob the railroad to cause further unrest among the populace. His goal is to have Sheriff Mackey and Deputy Sunday thrown out of office and replaced with his own municipal police force. But Aaron Mackey’s no fool and he ultimately uncovers Grant’s grandiose scheme. Unfortunately he doesn’t have the evidence to stop what Grant has set in motion. Thus the book ends with no closure at all, leaving both antagonists aware of the threat the other poses but with no resolution.

So to sum up. If you picked up book one of this series, you’ll likely get “Dark Territory” and enjoy it. We did. But honestly, we hate having to wait for that final big battle that’s brewing in Dover Station.