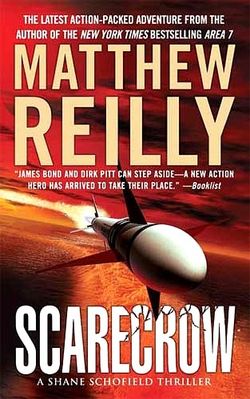 SCARECROW
By Matthew Reilly
St.Martin’s Paperbacks
457 pages
When this reviewer can chew through four hundred and fifty-seven pages of fiction as if it were a ball of yummy cotton-candy, you know there is lots of awesome action in those pages.  “Scarecrow” by Matthew Reilly is easily one of the fastest paced action thrillers I’ve ever had the pleasure of devouring.  From the very first page to the last, it takes off like a rocket ship cutting through one massive, terrorist style threat after another pitting our hero, Special Forces Marine Captain Shane Schofield against a veritable army of the deadliest professional killers in the world.
The plot is about as melodramatic as these kind of books can get.  A super secret group of arms dealers wish to create a second Cold War so that there will be a renewed demand for their product; a need that has lessened considerably since the collapse of the Soviet Union.  They plan elaborate missile strikes against the major cities of both the east and the west, using weaponry that can be traced back to specific nations and thus throw false blame on them. What the group doesn’t know is that amongst them is a psychopath who has no interest in a “cold” war, but rather this monster is intent on starting Armageddon and seeing the world destroyed.
The only thing that can foil this global scheme is the fact that all the missiles can be aborted by one universal “kill” code; a code that requires near super human reflexes to administer.  There are only fifteen men in the world, soldiers, who have such reflexes to properly activate this “kill” switch.  Thus the clandestine group puts a million dollar bounty on their heads, literally.  They also set a time-table as they want these targets eliminated before the launching of their insidious plan.
Captain Shane Schofield, code name Scarecrow, is one of those targeted for execution.  Of course, he isn’t that easy to kill and when he escapes the first attempt on his life, he immediately begins to turn the tables on his hunters.  At the same time he is fleeing these crazed killers, he is using his Pentagon contacts to figure out what is actually going on and by the last quarter of the book, Scarecrow has unraveled the plot and begins racing against time to save the world.
Honestly, there were times when reading Reilly’s over-the-top outlandish action sequence where I was thought even Michael Bay couldn’t do justice to this gung-ho Road Runner cartoon brought to life.  There is more action in this one book than any other dozen bestselling thrillers on the market today.  Reilly is the quintessential New Pulp writer who understands the rules of break-neck pacing and the objective of entertaining the hell out of his readers.  He does both masterfully.  It is no wonder he has a huge fan following amongst action readers; this reviewer being the latest recruit.
Note, “Scarecrow” was written back in 2003 and the dog-eared copy I just read was sent to me last year by my Canadian colleague, Andrew Salmon, a long time Reilly convert who knew I’d get a bang out of it. I just couldn’t imagine just how big a bang it would be.
Posted by Ron Fortier at 2:31 PM

A Marine in the Special Forces? Isn't that the Army?

Shay, the term, as used by the Pentagon, is used to encompass all specialized units in all the U.S. Military branches. If you were in the Army and used it, naturally you'd think of the Green Berets. But again, the upper echelon of the military use it generically and so a Marine, Airmen, Coast Guard sailor, can all be Special Forces, dependent on the unit they are attached to. Captain Schofield is part of Marine Special Forces. A Seal is Navy Special Forces.

Matthew Reilly's Scarecrow series of books are insane, but well worth a good read. They are some of the best action titles I've ever read.