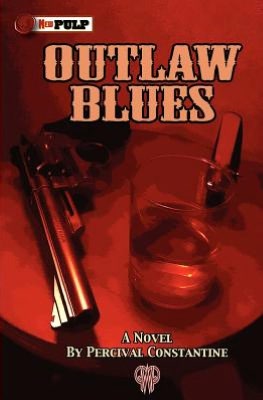 OUTLAW BLUES
By Percival Constantine
Pulpwork Press
180 pages
Pulpwork Press is one of the leading New Pulp publishers and books like “Outlaw Blues” are fine examples of the fast-paced, action packed offerings they put forth.  This particular novel, by Percival Constantine is the second in a gritty spy-vs-spy type series labeled Infernum.  Infernum is an ultra secret organization of mercenary assassins operated by a shadowy spy-master called Dante.
Although I did like the first book, it had flaws common to most new writers.  This is Constantine’s second book since that review and it is all too evident that his innate talent is quickly maturing with each new effort.  I have no reservations in saying this is easily the best thing he has ever written.
“Outlaw Blues” tells the story of a former Army Special Forces vet who becomes a killer for hire after leaving the military.  His name is Carl Flint and during the formative stages of his new career, he manages to rationalize his actions with the belief that the world is an inherently bad place and he’s doing what he must to survive and prosper.  If Flint has a conscious, he’s found a way to bury it until that time he can take his ill gotten gains and retire to a more normal lifestyle.
Unfortunately life doesn’t always adhere to our plans and during a botched up assignment, he accidentally guns down a pregnant woman.  Later, when he learns her baby was saved in the hospital, his dormant decency breaks free and from that point on he becomes a haunted soul.  He goes into semi-retirement, opens a blues bar and proceeds to spend the rest of his days in an alcoholic daze.  Then one day, one of Dante’s stooges surfaces to recruit him for one more mission; a job that will pay him enough money to set up a trust fund for the little orphan girl whose mother he killed.  Flint takes the job, fulfills his contract and then, after setting up the trust fund, disappears into Mexico under a different identity.
Of course in all noire tales, the hero can never truly escape his fate and sure enough death and violence follow him to this sleepy town south of the border, compelling him to finally accept his fate.  Carl Flint is very much a Heminway-like protagonist whose bloody finale is was set from the first time he picked up a gun.  Constantine writes him with such clinical economy, never wasting a single adjective or paragraph of mindless exposition.  By allowing Flint to define himself by his actions, we are given an honest look into his soul and by the book’s end come to respect him, if we are still unable to condone him.
The bible quote is, “He who lives by the sword, shall perish by the sword.”  Around that one single theme, Percival Constantine has given us a truly memorable character and powerful tale that proves his emergence as a genuine master of noire fiction. Even though intended as part of a series, let me assure you this is very much a stand-alone book that should be read for its own merits.  Not having read the first will not impeded your enjoyment in the slightest.  Whereas missing this book would be a real crime.
Posted by Ron Fortier at 4:14 PM