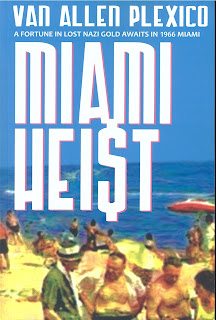 Two years ago, Pulp Factory Award winning sci-fi writer, Van Plexico turned his considerable writing skills to produce a crime thriller. It was called “Vegas Heist” and went on to win his second Best Novel Pulp Factory Award, making him the only writer to have done so in the group’s fifteen year history. As one of the reviewers of “Vegas Heist,” we immediately joined the chorus of readers urging him to do another and here it is much to our unadulterated delight.

Back in action are thieves Harper and Salsa and this time their target is a stash of Nazi good bars hidden on a small island off the coast of Miami, Florida. It’s 1966 and a full year has passed since the duo’s successful Vegas caper. But rather than continue to live leisurely off their ill-gotten gains, the guys are getting restless. Which is when Salsa learns the rumor of the lost Nazi gold on Ruby Island and persuades Harper to help him investigate whether it’s a mere folk tale or in fact has some validity.

Disguised as bridge card players attending a tournament, the two, along with their lovely ladies, travel to the island owned by millionaire Landsdale to scout out his multi-room mansion serriptiously. Harper considers it a wild goose chase until, but pure accident, actually uncover the gold. Rest easy, there are no spoilers here. Needless to say, once they know there is a wealth of gold ready for the taking, Harper quickly begins making a plan and assembling a team. Whereas the closer the day of the heist approaches, several incidents arise which have him second-guessing the entire caper.

By the time the actual robbery is under way, Hurricane Inez hits the area and things quickly begin to fall a part. Like all such tales, there is plenty of suspense, surprises and betrayals all leading to a wet and bloody climax none of the characters could have ever predicted. Once again, Plexico delivers a blistering story that had this reviewer turning pages so fast as to blur the words. This is a new classic crime thriller and a very welcomed addition to what we pray is a series only getting warmed up.
Posted by Ron Fortier at 7:15 PM