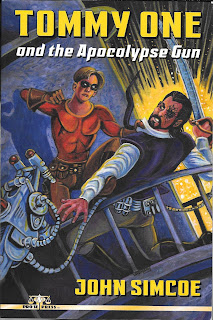 “Tommy One and the Apocalypse Gun,” is well written and Simcoe’s prose flows across the page effortlessly. The story itself is intriguing and this reader found himself quickly turning pages. This is a terrific read with likeable characters we very much would love to see lots more of. Till then, comics and pulps lovers, find this book and enjoy.
Posted by Ron Fortier at 2:36 PM