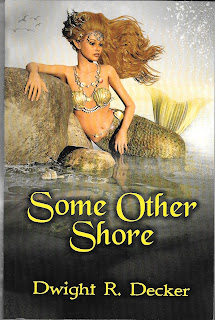 SOME OTHER SHORE
By Dwight R. Decker
Vesper Press
144 pages

We’ve known Dwight “Doc” Decker for many years and he has a reputation as one of the finest writers in genre fiction. This is his latest collection of shorts and it proves to be a delightful, eclectic bunch covering everything from fantasy to cautionary sci-fi. The half dozen here assembled beings with “Witch Hunt” a dangerous sequel to the Hansel and Gretel and it isn’t a fairy tale.

In “Extraordinary Proof,” a well known skeptic is in for the surprise encounter of his life in regards to aliens walking amongst us while “Raiders of the Future,” has time travelers going to the future to steal advanced technology. When they are captured by a futuristic librarian, it is the rookie on the team who comes up with the solution to their dilemma.

“Saxon Violence,” begins with an old British vicar attempting to resurrect King Arthur during World War II and gets some unexpected results for his efforts.  Had he done more historical research into the subject, his ending may have been different.  “Miracle By Mistake,” is marvelous piece in which a student from the far future finds himself working with a traveling circus in 1911 and learning his own true self-worth.

Finally we “The Last of Their Kind,” which tells of a World War II fighter pilot shot down in the South Pacific and rescued on a small island by a clan of real mermaids.

All in all, if you are on the hunt for old fashion, well told short stories, you needn’t look any further than “Some Other Shore.”  Decker even includes a friendly afterword in which he relates the inspirations for his yarns. A completely fun package we hated to see end.  Here’s hoping a second collection will soon be coming out way.
Posted by Ron Fortier at 3:52 PM