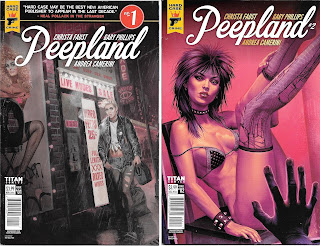 Back when Charles Ardai began the Hard Case Crime imprint it pretty much shook up the American publishing world. Focusing on both new and classic crime novel reprints, the brand quickly became synonymous with quality pulp storytelling. Then, after a few years, HCC moved to over to a British house, Titan books without skipping a beat and their wonderful titles continued to entertain legions of crime fans around the world.

We know, because we’ve been super HCC fans since day one and have reviewed too many of them to count here. Still, can you imagine our surprise when we recently discovered Titan and joined forces with HCC to do crime comics? Damn, nothing like this had ever been attempted since the post-World War II days of hard edged, adult comics prevalent in the U.S. throughout the early 50s before the whole Frederic Werthram “Seduction of the Innocent” debacle that put the final nail in the coffin for such violent, bloody graphic tales. Which in itself was the real crime.

Which is why, upon discovering HCC comics, we knocked off a quick letter to the big guy himself, Charles Ardai, all but begging him to assist us in finding these comics. A good friend, he wasted no time in putting us in touch with Titan’s U.S. representative, Katharine Carroll and two weeks later a large package arrivals in the mail crammed packed with several different HCC comics, among them, “Peepland.”

Taking place in sleazy sex world of the late eighties Time Square area known to locals as the Deuce, this quirky, fast paced thriller unfolds swiftly, it’s plot unraveling like a ball of yarn dropped from the couch and rolling across the living room floor. A two-bit pornographer known as Dirty Dick accidentally video tapes a murder in Central Park. Unknown to him, the killer is the son of one of New York’s wealthiest men and he will do anything to retrieve the damn film. Dick is soon caught and thrown under the wheels of a subway train but not before he leaves the sought after video with Roxy Bell, a peep-show worker. When she learns of Dick’s fate, she realizes she most likely is now on the same hit list and enlists the aid of her ex-boyfriend, Nick Nunzio. Pretty soon they are not only dodging hired killers but discover the rich Daddy has put a bounty on their heads for anyone to claim.

At present we have read the first four issues and our review is based on them. Considering you have two of the best crime novelist at the helm with Phillips and Faust, the reader is fairly guaranteed a terrific story infused with enough action and wacky black comedy to keep one entertain from page to page. Whereas on the visual side of things, artist Andrea Camerini is extremely talented and we love his depictions of the main characters. He is aided and abetted by colorist Marco Lesko and letterer John Bentancourt.  As we said, technically this is a truly beautiful produced comic title. If we had any criticism at all, it was the lack of useful captions in the first issue. There is a trend in comics today to forego the use of captions which we find ridiculous. Captions have a place in graphics if only to clearly delineate between scene jumps, clearly telling the reader where the locale is at any particular point in the story. That was lacking in issue one and some of the scene jumps were confusing. Happily someone, most likely  the editor, realized this and subsequent issues have begun to employ more such caption markers.

All told, “Peepland” is a gritty, brilliantly conceived thriller told in a grand, colorful cinematic way. It is what good comics are all about and a fantastic bridge between them and New Pulp. We’re looking forward to future issues with enthusiastic anticipation.