QUARRY IN THE BLACK 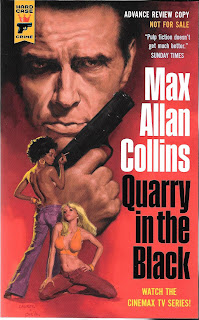 Regardless of one’s opinion of the new “Quarry” Cinemax TV series, it has shined a light on these fantastic books and that is a benefit worth applauding.  As Collins says in his Afterward, the first Quarry book came out in 1976 and was topical at the time. Upon reading these new editions, one is catapulted back to very different America and thus they have truly become “period pieces.”

Which, in the case of “Quarry in the Black,” is poignantly ironic with its setting being the presidential campaign of ’76 pitting Richard Nixon against George McGovern.  And here we are smack in the middle of another contentious race with all the same circus atmosphere they all seem to engender.

Quarry, the Vietnam sniper vet turned professional assassin, is given the job of killing Reverend Raymond Wesley.  A one time drug addict and pusher, Wesley found redemption while in prison and upon his release became a vocal crusader for the Civil Rights movement and McGovern supporter.  Although Quarry normally has no qualms as to who his targets are, the political implications of this assignment bother him. Enough so that he questions the Broker, the middleman who gives him his contracts, as to the relevancy of such a hit.  In other words he wants to know why a good man like Wesley should be slated for death.  The assignation of Martin Luther King is very much on his mind and he has no desire to be the next James Earl Ray.

The Broker, sensing his unease, explains that their client claims Wesley’s ministry is a sham; that he is still dealing drugs.  Only now he is using his new public persona to facilitate his old criminal ways.  The moral issue put aside temporarily, Quarry takes the job and signs on to Wesley’s organization as a disillusioned veteran wanting to help the preacher’s noble cause.  But as in any Quarry novel, things are never exactly what they seem and before long, our sarcastic protagonist is caught up with white supremacists, crooked drug dealers and a beautiful campaign worker who had an affair with the holier than thou Reverent.

Bullets fly, bodies fall and in the end, Quarry, as ever, unmasks the truth for all its sweet bitterness.  Having come to this series late, we will be forever grateful to Hard Case Crime for having the wisdom to bring them back in these beautiful produced new editions.  Do yourself a favor and get every single one of them.  Nobody writes noir better than Max Collins.

PS – As for that TV show, we give it a B plus.  Keeping in mind, this is an altogether different medium and the creators’ vision of Quarry.  It isn’t a bad one and we have enjoyed season one.  Hopefully with a season two, we’ll see the character evolve into one more aligned with his prose identity.
Posted by Ron Fortier at 2:16 PM

I'm a big fan of Max Allan Collins and the Quarry books. When I drove back east from an assignment in California, I swung by and dropped off a book for him to sign. He wasn't there, but Barb was, and she was kind enough to make sure the book got signed and shipped off to me in Berwick. Ron, you probably don't remember me, but we've met a few times, I think I borrowed Steranko's History of Comics from you. I still have some of your work, including the Terminator GN and a few other things. MAC mentioned your website, so I swung by. Rich

Hi..ah Rollerball...and thanks for commenting here. Obviously as you're from my nearby my hometown of Somersworth, it's great to hear from you. And happy you were able to get that book signed by Max. He's such a great guy. Aside from correspondence we've never met face to face, but I hope to correct that some day. Again, thanks for posting here. Much appreciated.