WHY DOES BATMAN CARRY SHARK REPELLENT? 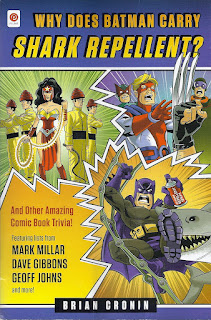 What kind of book would you expect from a lawyer who is a true comic book geek? Brian Corbin writes a regular blog for Comic Book Resources which has brought him into contact with some of the leading professional writers and artists in the comic field, not to mention lots of enthusiastic die-hard fans along the way.

This collection of trivia lists is his follow up volume “Was Superman A Spy?” by the same company and it is absolutely wonderful.  With such bizarro lists such as Ten Crazy Items Found on Batman’s Utility Belt from which the book gets its title to such media related topics as Seven Bands That Got Their Names from Comics.  More and more comic cons are hosting all manner of comic trivia panels and contests and if you’ve ever entertained the idea of doing such, this little volume could prove invaluable.

My one critique is Cronin tends to spotlight the big two, Marvel & DC, overly much giving short shrift to lots of other great companies in the process.  An example found in his Six Cameos by Clark Kent and Lois Lane Outside of DC Comics. A little more research and he might have found the fan favorite scene in Now Comics “Sting of the Green Hornet” where Clark & Lois, circa 1940, are seen leaving after their interview with President Franklin Roosevelt.  Cronin is obviously unfamiliar with the scene and the series.  I’m not. You see, I wrote it.

Again, a really fun book any comic fan would appreciate.
Posted by Ron Fortier at 7:52 PM

I wouldn't say I was completely unfamiliar with it. ;)

Suffice it to say, pretty much all of the lists were longer when I handed the book in than they were after the editing process was finished. :)

Glad you dug the book, Ron!

I did indeed, Brian. And reading your comments here, I can easily imagine just how BIG this book could have been. Glad I wasn't the cutting editor as each list was a hoot. I sincerely hope you do lots more of these.