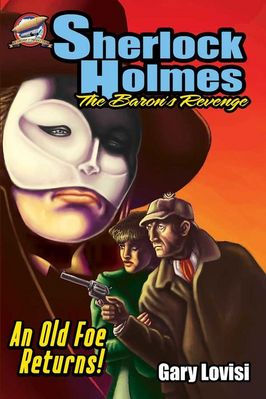 When considering all the pastiches written involving Sherlock Holmes, it is rare to find one that is purely a sequel - most Sherlockian non-canon lore involves crossovers with other public domain characters, integration of science fiction and/or horror themes, or loose adaptations of the canon.

Gary Lovisi's Sherlock Holmes: The Baron's Revenge, published by Airship 27 Productions, is a rare novel - a straightforward sequel to a past Holmes story that manages to be a crackling good read.

The novel serves as a sequel to "The Adventure of the Illustrious Client" from 1927's The Casebook of Sherlock Holmes. Much like of Conan Doyle's later Holmes work, The Baron's Revenge shares a similar hard-boiled, almost pulp-flavored edge as it tells its tale. Thankfully, one does not have to read Conan Doyle's story in order to understand The Baron's Revenge, given various callbacks to the original tale.

It's also a daring book in that it is written (except for one chapter) from Holmes' perspective. Although it would have been easy to fall into cliche and write Holmes as exceptionally omniscient, Lovisi does Holmes a great service by writing the detective at the proper emotional tone. It is easy to "hear" Holmes narrating the story. Rob Davis' illustrations throughout the book provide it with the right sense of pace and atmosphere, almost making it seem like a "lost" edition of The Strand Magazine. (Thankfully, it is a relatively quick read - I finished it within two days while commuting back and forth to downtown Chicago).

The Baron's Revenge is one of those rare Holmes books - an unexpected sequel that is a very good read and well worth checking out. It is available through Airship 27 as well as Amazon.com.

This book is worth owning and reading. Repeatedly.

Editor's note: Gordon regularly covers the intersection of Sherlock Holmes and the entertainment industry. You can also find him at Blog THIS, Pal! and Comic Related.

nice idea.. thanks for sharing..