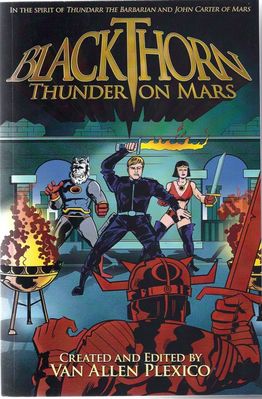 BLACKTHORN
Thunder on Mars
Edited by Van Allen Plexico
White Rocket Books
225 pages
Why on earth would a writer/editor like Van Plexico want to take a 1980 Saturday morning cartoon television show and meld it with a classic Edgar Rice Burroughs fantasy series? The answer to that perplexing question is found in this book, which by the way, is the result of that odd pairing.  In the introduction, Plexico tells of his love for an old Jack Kirby created TV series called “Thundarr the Barbarian” and how, for whatever twists of the muses, it seemed to plague his thoughts over the years.  Enough so that he decided to one day do something with the concept, adding a new and fresh spin to the plot.  It would be another few years for that final element of this eclectic brew would reveal itself to him when one day he started thinking of Burroughs legendary Martian series.
Just like that the pieces were suddenly all there and when he mentally assembled them in his ever wondrous imagination, there he beheld the story of an American General who, upon his death in the Middle East, awoke to find his soul had been replaced in a brand new body; a body locked in the lab of a mad sorcerer on the planet Mars.  Yet more revelations arise when this character, General John Blackthorn discovers his spirit has not only traveled through space but also time as this is a Terra-Formed Mars of the far-flung future.
Within minutes of his bizarre awakening in his younger, stronger body, Blackthorn manages to escape the sorcerer with several other soul-transplanted fellows.  In their flight, he eventually meets the beautiful, dark haired sorceress Aria and the fur skinned humanoid creature Oglok of the Mock Men.  It is this trio, once met, that join forces to travel the amazing, fantastic landscape that is a post-apocalyptic Mars.  Their further adventures are chronicled by a half dozen of the finest writers in new pulp today.
Mark Bousquet, Joe Crowe, Bobby Nash, James Palmer, Sean Taylor and I.A. Watson spin exciting, fast moving adventures that pit Blackthorn and his allies against lizard men, battling robots and an ocean wide haunted valley from which no one has ever returned to name a few.  Each story is a well crafted pearl in a thematic necklace of classical pulp sci-fi and brings Plexico’s dream to vibrant life before our eyes.
It is abundantly clear that Plexico has tapped the mother-lode of adventure fiction with John Blackthorn and I can guarantee you we haven’t seen the last of him, or Aria and Oglok.  One can only wait in breathless anticipation to see where on the giant Red Planet their travels take them next.
Posted by Ron Fortier at 10:05 AM

This sounds like a great deal of fun. That's why I love dropping by here, you always seem to find some very cool books to share.

Thanks, Greg, and of course that is exactly why I write these reviews, to share cool books like "Blackthorn" - Your kind post tells me I'm getting the job done. Thanks again.