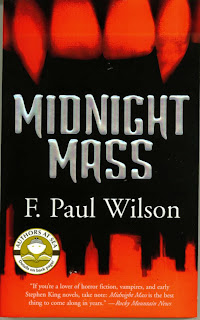 One of my favorite horror movies of all times is Bela Lugosi’s DRACULA and it’s sequel, DRACULA’S DAUGHTER. While growing up I was always fascinated and scared silly by the idea of undead creatures ruling the night and drinking the blood of others. When Hammer Films came along in the 60s with Christopher Lee inheriting the role of the Transylvanian Count, there was a distinct erotic element added to the tradition which I didn’t mind as long as the vile nature of the monster remained. Oh, sure, he could gloss himself over to ensnare unsuspecting humans who were his prey, but in the end he was still that same disgusting, horrible creature with absolutely no mercy within his cold, dead heart.

Thus it is no surprise that I fell in love with Stephen King’s modern take on the entire vampire myth in his absolutely marvelous epic, ’S . That an entire small town, like the one I grew up in, could be taken over systematically by the undead totally awed and scared me at the same time. Then came Robert McCammon’s THEY THIRST and he took this same conceit up a notch when he had the vampires overwhelm Los Angeles and rule over it with their unquenchable blood lust.

If you haven’t guessed by now, I was not all that happy with the advent of Anne Rice and her sissified version of the undead. No offense, but these things she modeled after 19th Century Romance novels were not the cruel, decadent, rotting monsters I’d come to know and relish. It seemed for a while, thanks to the popularity of her work, that we would never see the true horror of vampires again. Was I ever wrong, and gratefully so.

MIDNIGHT MASS by F. Paul Wilson is a glorious, gory return to the nightmares of King and McMcCammon in a rather logic progression of their masterpieces. In this grim and dark thriller, the undead have not only captured mere villages or cities, but most of the known world. They have swept over and conquered all of Europe, Asia and .

When the book opens they have crossed the Atlantic and begun their assault on , quickly winning most of the East Coast to include their new headquarters, . With this foothold established, it is only a matter of time, something they have an endless supply of, before they completely subjugate the entire continent.

Into this world devoid of any hope, introduces us to a determined Rabbi, a vigilante, bomb-making nun, a lesbian revolutionist and a gung ho Catholic priest named Joe Cahill. Together they form the nucleus of the first real opposition to this new Vampire Nation. Against all odds, with faith, courage and good healthy dose of righteous anger, these four set about reclaiming their desecrated church from the foul hands of the devil’s minions. From this one battle, which Father Cahill appropriately likens to the Alamo, these four dare all in hopes of igniting a spark among those humans still alive but afraid to stand up and fight. That they succeed and what happens next when the vampire overlords retaliate had me turning pages late into the night. MIDNIGHT MASS is an awesome experience and now takes its place on my library shelf beside ’S and THEY THIRST as one of the finest vampire thrillers ever written. Thanks, F. Paul Wilson for restoring my faith in monsters.

You know Ron I loved this book, well at least the first half of it or so. I think Wilson did a great job in establishing a new kind of story...an then the big plot turning point happened, which I didn't think was bad, but was left cold with the character. Change would be obvious yes but it just felt like a different book. It seemed like he was also setting up a sequel. Its been a few years now and he's had about 4 Repairman Jack novels come out but nothing else to my knowledge. I'm wondering if he's working on something.

I also recommend THE KEEP by the same author. It's another sort of Vampire monster tale I think you'd throughly enjoy.

I agree Anthony that the end does
have an a feeling that's there is more to come with these characters.
But then again, so do most really
good stories. As a reader you invest so much with them its only natural you want the story to go on so you can know what happened to them next.
I have heard of THE KEEP. Will have to keep an eye for it.

I like this blog is fantastic, is really good written. Congratulation. Do you want to see something more? Read it...:Great investment opportunity in Costa Rica: beach real estate, condo, condos for sale. Visit us for more info at: http://www.costa-ricarealestate.com

This is one of my favorite Wilson novels. I interviewed him when it was released and he told me he was tired of sad, poetic Anne Rice vampires in puffy shirts. I think he made his point.

If you haven't tried Wilson's Repairman Jack novels, I highly recommend them, starting with The Tomb.

It's a great series of 21st Century pulp novels.

Hi Mark, thanks for stopping by.
I'm not at all surprsied MIDNIGHT MASS is a big hit with old traditional vampire lovers such as we two. For sure. I actually read one Repairman Jack novel two years ago, something I believe called THE HIVE.
It was quite good. But everyone and their uncle screams I pick up THE TOMB. Looks like I'm going to have to do that and soon. Ha.

Well, THE TOMB is the first, and Jack really works best when you read them in order. Wilson puts out a new one every year, building toward the grand finale in NIGHT WORLD. Every Jack book is a frantic page turner. Wilson knows his stuff.