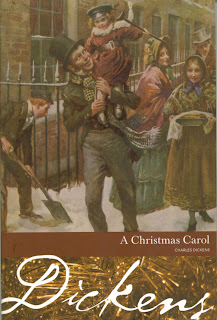 There are still many classics I’ve yet to lay my hands upon. As Thanksgiving passed and we entered fully into the Christmas season, my thoughts drifted to all the wonderful movies with this particular holiday theme that I like so much. For me, A Christmas Carol remains the most enjoyable, followed closely by It’s A Wonderful Life and A Christmas Story. I wonder if many people know that Dicken’s immortal tale of old Scrooge is the most filmed novel ever. From the days of the silent movies through to animation and even a Muppet Christmas Carol, the story has been told and retold countless times.And yet I’d never read the actual novel. Well, to be fair, novella. It is a relatively short piece and one of five Christmas stories that Dickens wrote during his life. This wonderful volume also contained two others; The Chimes and The Cricket On The Hearth.

Now having finally read the original, I’m truly delighted to have done so. Dickens had a true sense of human nature and he reveled in telling stories of people from all social standings. He understood the woes of the poor and downtrodden and forever gave them a poignant, suffering nobility. What surprised me the most about the story was how fast paced it is and just how quickly old miserly Scrooge’s conversion comes about. On the oft chance that there are those of you still unfamiliar with this cautionary tale, it’s plot is simple enough.

Ebeneezer Scrooge is a cantankerous old man who detest charity and believes hard work is the only means to salvation. Enough so that he treats his clerk, Bob Cratchit, like a slave and refuses to celebrate the Christmas holidays. On the eve of Christmas he is visited by the waling ghost of his late business partner, Jacob Marley, who has come to warn him. Unless he changes his ways, his own eternity will be spend in misery. Marley tells Scrooge he will be visited by three ghosts, spirits of Christmas past, present and future. Which is exactly what happens and in those three visitations, Scrooge’s heart is thawed to the blessings of love and family. He is forever changed into a decent, thoughtful and generous soul who finds great satisfaction in doing for others the rest of his days.

In so short a collection of words, Dickens crams more drama and pathos than any ten writers could hope to accomplish. He cuts to the quick of human emotions and frailties and delivers a brilliant testimony on the powers of Christmas and good fellowship. The message it brings the world is even more relevant in our consumer obsessed society than ever before.

Of the remaining two stories, I found The Chimes to be difficult and confusing. It tells the story of a porter who works near an old church and is forever haunted by the sound of the steeple bells. Somewhere in the New Year’s celebrations he is given a vision of the future by Bell Goblins. It is a bleak setting due in part because he has listened to the wrong advice and not to his heart. Upon waking, he sets out on a different, more jovial and hopeful path. Not one of Dicken’s better efforts.

Whereas the last of the three, A Cricket On The Hearth is pure Dickens and much fun to read. A group of working class people prepare to celebrate the wedding of Tarkelton, an old skin-flint who owns a toy shop, to a beautiful young woman. Meanwhile a Carrier name John Peerybingle and his own young wife, Dot, have just had a new baby and he has a hard time believing his good fortune. There is also Caleb, the widowed toy-maker who lives with his blind daughter and works for Tarkelton.

Now into their midst comes a deaf old man who is down on his luck and has nowhere to stay. Dot Peerybingle urges her husband to take him in and soon events begin to occur that come to test their love and loyalty to one another. All the while the little cricket who lives in the Peerybingle hearth continues to inspire the residents with a magical charm that saves John Peerybingle from making the worst mistake of his life. By the end of the story the true identity of the mysterious lodger is resolved and all are made happy again in typical Dickens’ style. Having read several of his novels while in school, A Cricket On The Heart reminded me of that old familiar charm inherent in his longer works. It really is a gem of a story and one I’m glad to have found at last.

Reading new books is always a pleasure, but it can never quite compare with settling down with something this old and cherished. If you are looking to add some old fashion cheer to this holiday season, look no further than Mr. Charles Dickens and a Christmas Carol.